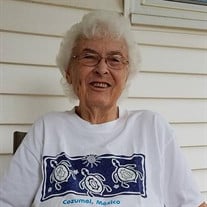 Mary Ann Kidd Springer, 89, resident of Fort Collins, Colorado, former resident of Appleton City, Missouri, passed away August 27th. Mary was born September 11th, 1929 to Dana Kidd and Hilda Ziesenis Kidd of Lawrence, Kansas. Mary graduated from Fort Collins High School in 1947. She was united in marriage to Robert Sheppard Springer , “Shep”, of Fort Collins, Colorado on March 28th, 1948. This spring they were overjoyed to celebrate their 71st wedding anniversary with family and old friends! They were the proud parents of five children: Pamela (Arthur) Butterfield of Colorado Springs, Colorado; Paula (James) Brant of Littleton, Colorado; Penny (Patrick) Walker of Morrison, Colorado; Patrick (Patricia) Springer of Thompson’s Station, Tennessee; Perry (Barbara) Springer of Fort Collins, Colorado; with 17 grandchildren and 21 great-grandchildren. Mary was a homemaker that loved knitting, quilting, and cross-stitching. She loved doing jigsaw puzzles with her grandchildren. She made a quilt for each of her grandchildren and great-grandchildren. Mary was an accomplished gardener and was a member of the Rural Home Improvement Society in Bates County, Missouri. Over the years, Mary and Shep found great joy in raising Dexter cattle and Newfoundland dogs, bringing much joy to their lives. She was a Poudre School District Bus Driver for 18 years. Graveside services will be at 2:00 p.m. August 31st at Kidd’s Chapel Cemetery, Lowry City, Missouri. This chapel was built on land donated by Mary’s grandfather and the stone for the chapel was provided by him as well. We are happy to honor her wishes and lay her to rest. Memorial donations may be made to Pathway’s Hospice of Larimer County at 305 Carpenter Rd., Fort Collins, Colorado 80525, or Trinity Lutheran Church, 300 E St., Appleton City, Missouri.

The family of Mary Ann Springer created this Life Tributes page to make it easy to share your memories.