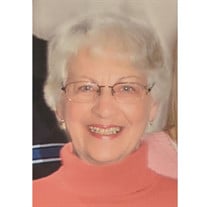 MaryJane Cavallaro, 87, of Fort Collins, passed away peacefully on June 11, 2021. MaryJane was born to Samuel and Adeline (Lopiano) Pilato in Rochester, New York on December 24, 1933. She was a first-generation Sicilian American. She attended East High School in Rochester and had a natural affinity for opera singing. She attended Eastman School of Music and was invited to join the Juilliard School of Music -- to which her parents wouldn’t allow. MaryJane met her future husband, Alfred Cavallaro, when he heard her singing and asked his friend to introduce him to “The Canary.” They dated during his service in the Korean War and married on June 19, 1954. They were a part of the “Kodak family” that moved to Northern Colorado in 1971 when Kodak opened their facility here. MaryJane was an incredibly talented opera singer who sang throughout New York, but one of her proudest moments was an impromptu duet in Italy with a renowned opera singer. Beyond her music, Mary Jane loved her family, dancing, cooking amazing meals and most importantly, she loved Jesus. Later in life, she became a published author of Divine Intervention, a prophetic memoir about her life and the intimate teachings from the Lord. No matter who walked in her door, she was always reminding them boldly, "Jesus loves us so much and He has done everything to save us." Her outspoken faith, unrelenting prayer & passion for Jesus has touched many lives. MaryJane is survived by her children, Cheryl Cavallaro of Highlands Ranch, CO, Darlene (Joe) Bahr of Arvada, CO, Chris (Tasha) Cavallaro of Timnath, CO, Scott (Stephanie) Cavallaro of Littleton, CO, her grandchildren Anna, Lindsay, Rachel, Chad, Lauren, Jack, Addie, Jake, Joey, and eight great-grandchildren. MaryJane was preceded in death by her parents, husband, and siblings Frances Lanendola, Micky Young, and John Pilato. A funeral service will be held at Clearwater Church, 2700 S Lemay Ave. in Fort Collins, on Monday, June 21, 2021, at 10:30 AM followed by a reception at Clearwater and burial at Grandview Cemetery at 2:00 pm. Please wear casual attire, shorts are recommended. Memorial contributions may be made to something that was near and dear to MaryJane’s heart; ministry in Italy. Anna is MaryJane’s first granddaughter and her family are currently missionaries in Italy, a place that has fewer people who know Jesus than China and Iran. MaryJane loved both Italy and Jesus & she would be honored by your donation. If you would like to give, the link is https://givesendgo.com/MatthewAnnaDavis.

MaryJane Cavallaro, 87, of Fort Collins, passed away peacefully on June 11, 2021. MaryJane was born to Samuel and Adeline (Lopiano) Pilato in Rochester, New York on December 24, 1933. She was a first-generation Sicilian American. She attended... View Obituary & Service Information

The family of MaryJane Cavallaro created this Life Tributes page to make it easy to share your memories.