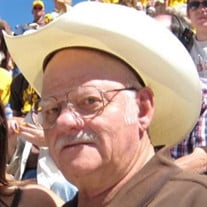 Mason (Mase) Frederick Skiles passed away in Fort Collins, Colorado due to complications from COVID-19 on Tuesday, April 13, 2021. Mason was born on April 30th, 1937 in Johnson County, Wyoming, the oldest of four children. The family ranches were located on Sussex River Road and Soldier Creek near Kaycee, Wyoming. His parents were David Frederick (Fred) Skiles and Una Valera (Gaither) Skiles. Mason grew up working on the family ranch, breaking rough stock, bucking bales, building fence, and doing whatever needed to be done. When it came time for high school, he boarded with a family in Buffalo, but went home on weekends to work. From these times, he developed an aversion to chicken, corn on the cob, and oatmeal that lasted his entire life. Mason was a two-way starter, weighing in at 185 pounds, on the 11-man 1954 state runner-up Buffalo High School football team, earning him a scholarship offer from his beloved Wyoming Cowboys. One of the family’s most cherished photographs is of Mason with his brother, Gary, and a partner, Sundance Taftner, saddling a wild horse at the Johnson County Rodeo. The picture was a prelude to a lap around the arena where the horse cleared the fence and headed out across the prairie. Mason also earned a scholarship offer from the University of Wyoming rodeo team. Mason married the love of his life, Sharlene Mae Black, on August 22, 1964 in Buffalo, Wyoming. Theirs was a spirited courtship, as Sharlene was working as a certified radiology technician at the local hospital. Her friends advised against dating a cowboy. Mason was the President of the Johnson County Farm Bureau Association, and they first met at a Farm Bureau dance. Mason managed to keep one of her earrings, thus having a reason to visit Sharlene to return it the next day. He believed in and was passionate about education, such that when his daughter, Lisa, called to let him know that she was going to take a year off of college to work and ski in Jackson Hole, he said, “Well that is a great idea honey, you should do what you think is best. Of course, you’ll be paying for college from here on out.” She returned to UW in the fall. In his last visit with his granddaughter, Kaycee, he talked with her about the importance of graduating from college and choosing a field that would make her happy. Mason was a proud graduate of the University of Wyoming with multiple degrees, including Agricultural Economics and Agronomy. Mason was a Certified Public Accountant and an attorney. He built his practices in both fields in southeastern Wyoming and northcentral Colorado. He specialized in tax, business, ranch, water, and estate law. He retired in 2014. Self-employed his entire life, he owned a quarter block office building in downtown Laramie with his long-time business partner, Jerry Devin. A Laramie Boomerang reporter once wrote “Skiles is a solid, mustached, avuncular man with a bald pate rimmed with white hair and wisdom-worn features. He has an easy intelligence that he carefully hides behind warmth and humor - as if it might embarrass him or a guest.” He had a generous heart, often accepting payment from someone down on their luck in labor or from widows in pies. Mason once accepted a beautiful quarter-horse, Beau, in payment, and announced to daughter, Barb, then living in an urban area, “I’ve found you a horse. I suggest you find a place to keep him.” Years later, his granddaughter, Kaycee, learned how to ride on Beau, by then an irreplaceable family member. Mason loved working on their cabin in Jelm, raft trips with friends, boating adventures with family, and hunting. His favorite hobby was fishing, and he looked forward to fishing with his son Dave whenever he could. He was a lifetime member of the Cowboy Joe Club, the Alco Rod and Gun Club, and the Laramie Elks Club. He was a member of the Wyoming and Colorado State Bar Associations. He was a veteran of the United States Army and member of the American Legion Post 14. He donated regularly to 4H. For years, he donated office space to both the Albany County Republican Party and Laramie Jubilee Days. He and Sharlene served as the Grand Marshals of the July 4th Parade, a highlight for both of them. A member while in college, he was the legal advisor and Trustee for the Farmhouse Fraternity. Mason was a founding member of Ark Regional Services. He regularly donated pro-bono legal and accounting services to many Laramie non-profits. Mason is survived by his wife of 56 years, Sharlene Skiles, and their four children, Barbara Phillips Robinson (Mark Miller), David Phillips (Kerri), Elizabeth (Lisa) Skiles Parady (Fred), Mike Skiles and many cherished friends. His grandchildren are Jason and Ryan Phillips, Tarik Simmons, Aisha Thomas, and the Parady sisters (Sarah, Katelyn, Annalise, and Kaycee). His great grandchildren include Ava, Sahara, and Davan Thomas, Zia and Vaelon Simmons, Imogen Montville, and Mackenzie and Marissa Parady O’Dowd. He is survived by his brother, Gary Skiles (Kay) and sisters, Della Pitsch and Patricia Stockfish (Ken). He was preceded in death by his parents, David Frederick Skiles and Una Valera (Gaither) Skiles. As a Scots-Irish descendant with a great sense of humor, he asked for a wake to celebrate his life. He told his family that he was “at the end of the trail, but it had been a good ride.” Mason was western to his last breath. A memorial service will be held in July at Woods Landing. Donations in his memory may be sent to Ivinson Memorial Hospital Foundation or local charity.

Mason (Mase) Frederick Skiles passed away in Fort Collins, Colorado due to complications from COVID-19 on Tuesday, April 13, 2021. Mason was born on April 30th, 1937 in Johnson County, Wyoming, the oldest of four children. The family ranches... View Obituary & Service Information

The family of Mason Frederick Skiles created this Life Tributes page to make it easy to share your memories.