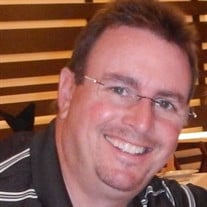 Matthew Allen Weaver, age 49, passed away on Sunday, July 3, 2016 at Lake Minatare, Nebraska. He was born on February 24, 1967 in Bellefonte, PA to Barry and Nancy Weaver. He attended Matterville Elementary in State College, PA until he moved with his parents to Laporte, CO in 1976. He graduated from Poudre High School in 1985. Matt served in the U.S. Marine Corps and was stationed at the U.S. Embassies in Paris, France, Havana, Cuba and Vienna, Austria. He attained the rank of Sergeant. On August 2, 1998, he was united in marriage to Judy Lynn Olhausen in Loveland, CO. In 1990, Matt began working at Woodward Governor Company in Fort Collins, CO as a security guard. He worked his way up through the organization and became an O.E.M Account Manager. In 2006, he graduated from Regis University with a degree in Business Administration. He eventually was promoted to Customer Account Manager. He had twenty-six years of faithful service to the company. Matt was a devoted husband, father, son and friend. He had a love for the outdoors, especially skiing and golfing, along with a passion for his grill and cooking gourmet meals. Left to cherish Matt’s memory are his wife of 19 years, Judy; his son, Colton (15); daughter, Cassidy (13); parents, Nancy and Barry Weaver of Cheyenne, WY; in-laws, Lynn and Dale Olhausen of Loveland, CO; brother-in-law, Jeff Olhausen of Loveland, CO; sister-in-law, Jill Olhausen of Frisco, TX, along with many relatives and friends. A memorial service will be held at Redeemer Lutheran Church, 7755 Greenstone Trail, Fort Collins, CO, Tuesday, July 12th at 2:00 PM. There will be a reception at the church following the service. Donations can be made to Redeemer Lutheran Church for the Matt Weaver Memorial. These contributions will be dedicated towards a piece of art in Matt’s honor and support future educational opportunities for his children.

Matthew Allen Weaver, age 49, passed away on Sunday, July 3, 2016 at Lake Minatare, Nebraska. He was born on February 24, 1967 in Bellefonte, PA to Barry and Nancy Weaver. He attended Matterville Elementary in State College, PA until he moved... View Obituary & Service Information

The family of Matthew Allen Weaver created this Life Tributes page to make it easy to share your memories.