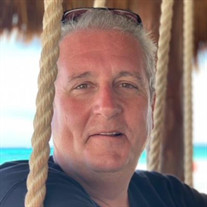 Michael Patrick Clancy, loving husband and father of two, died in Fort Collins on December 23, 2020, at the age of 58. Mike is survived by his wife, Jane, his son Tom and daughter Ellie, and many family and friends. He will be dearly missed by his mother, Ann, his brother John, sister Trinity, sister Carolyn and her husband Bob, his nephew, sister-in-law and nieces, and much more extended family. He is preceded in death by his father, Richard Clancy, and brother, Robert Clancy. Mike was born on October 18, 1962 in Glendale, California to Richard Clancy and Ann Bassett. Mike is a retired Air Force pilot, and he served in the Gulf War. Mike and Jane were married in Bury St. Edmunds, England in January 1993, and their son Tom was born in 1993 and daughter Ellie was born in 1996. He began his career in the Air Force, enlisting after high school. Starting as a flight engineer, Mike later became an officer, and was captain of the E-3A Sentry AWACS. After he retired from the Air Force, he continued flying, and he eventually landed at Atlas Air, as captain of the Boeing 747 cargo plane. Mike loved flying, and everything about it. He loved his family, his dog and his cats, and his friends, and he put all of them first. Serving others was so ingrained for Mike. It came naturally to jump in anytime to help -- his wife, his kids, his mom, his brother and sisters, his friends and even strangers, without ever a thought of any recognition. With his training in appliance repair at Sears when he was a teenager, to his training as a flight engineer in the Air Force, and his natural skill, Mike could fix or build anything. It was one of his many endearing qualities to his family and friends. If he couldn’t fix, repurpose, or build it himself, he’d research it until he figured it out. He was both talented and tenacious. Often that meant he took on a lot, but that’s because Mike truly wanted to take care of his family, give them a good life, and a comfortable home. To know Mike was to know a kind, loving, generous, good-natured, fun, devoted, and confident man. Some thought of him as a gentle giant, and those who knew him since he was young recall his sweet, crooked smile. He was an exceptional pilot, flying 747 cargo planes with skill and precision. And when he was home and off duty, he loved trying new recipes and cooking delicious meals. Mike was always there to lend an ear, give advice or reassurance, or just share a story, a laugh, and a drink on the deck at sunset. He was often found there talking about life and the kids with his wife and best friend, Jane. Mike had a way of making people feel welcome, comfortable, and as if they had been friends for a long time, even if they had just met. Services were held for the immediate family only due to Covid-19 restrictions. A memorial service will be held in the spring or summer of 2021 when it is safe for extended family and friends to attend. Donations can be made to the Larimer County Humane Society in honor of Mike at: https://register.larimerhumane.org/give/234539/#!/donation/checkout

Michael Patrick Clancy, loving husband and father of two, died in Fort Collins on December 23, 2020, at the age of 58. Mike is survived by his wife, Jane, his son Tom and daughter Ellie, and many family and friends. He will be dearly missed... View Obituary & Service Information

The family of Michael Clancy created this Life Tributes page to make it easy to share your memories.