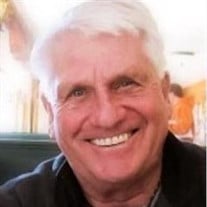 Michael John Patrick Lynch, 76, loyal and loving husband, generous father, “naughty grandpa” and papa to many passed away Monday, August 12, 2019. He lived his life to the fullest with a generous and caring attitude and a love of fun and adventure with a tinge of mischief. Michael was born in Los Angeles on January 15, 1943 to Corinne and Jerome Lynch. He grew up in Northern California and Montana with his sister Corinne and brother Pat. He was said to be a bit of a trouble maker until he met his wife in Santa Rosa at 20 years of age. They eloped 4 months later and moved around while he went to school, first for his PhD in cellular physiology to become a scientist, then an additional 7 years of medical school/residency to become an Internal Medicine Physician. He practiced medicine in Beaufort, SC with the Navy and then moved to Fort Collins, CO where he established a 34 year private practice with patients he adored—first at Internal Medicine Clinic and then St. Lukes medical clinic, a non-profit clinic which doesn’t charge those in need and also covers additional outside medical expenses and procedures. Michael loved God and was a devout Catholic who attended St. Joseph’s, John IIIXX and Elizabeth Ann Seaton. He was a charitable man who did much for those in his community, and those outside of it—though he always did so anonymously. He embodied the Colorado lifestyle as he loved to be outdoors doing anything and everything active. He was a jack of all trades- gardener, mountain biker, scuba diver, skier, climber, runner, snowshoer- yet master of none- especially fishing. He was an extremely intelligent man who was well respected but was best known for his sense of humor, as he loved to tease and make people laugh, especially at themselves. Michael was also a sensitive man, but didn’t want people to notice. He loved his wife of 55 years and together had a beautiful family who he relished spending time with. He had a unique home that was open to anyone and everyone, with someone always living in his extra room(s) and a dinner table that could accommodate the revolving door of people he provided a sense of family to as they passed through, or remained in, his life. He enjoyed traveling with his wife, friends and family to various countries off the beaten path and on a shoe string to experience it like the locals. A real man’s man, he was mostly surrounded by women, resulting in a real appreciation for the men in his life and a need for adventure which included; commercial fishing in Alaska early on, hiking Kilimanjaro, biking in Moab, shark diving in South Africa, and missionary medicine in Zimbabwe, Nicaragua, and Papa New Guinea. He leaves behind his wife, Dianne Lynch; a son, Michael Lynch and his wife, Angela Lynch; a daughter, Michelle Elwell; a daughter Kelley Lynch and her husband, Travis Hunter; a daughter Katherine Lynch and her husband Rob Malave; and grandchildren (Maya, Aidan, Avery, Andin, Rachael, Tayler, Brandyn, Irelyn, Hudsyn, Rhyanne, Kristin, Paxton, Addisen and Kendall ; two great-grandchildren (Phoenix & October); his sister Corrine Norton and brother Pat Lynch, and many more family members, close friends and dedicated patients. A rosary will be held on Thursday, August 29 at 7:00 pm at St. Joseph’s Catholic Church, 300 West Mountain Avenue, Fort Collins, CO 80521. A Funeral Mass will be held on Friday, August 30 at 2:00 pm (also at St. Joseph’s). Please join us for his Celebration of Life Memorial and Party on Friday at 3:30 pm at the Drake Center, 802 W Drake Rd, Fort Collins, CO 80526. ** Memorial contributions can made in Dr. Lynch’s name to St. Lukes Medical Foundation, a non-profit organization Dr. Lynch co-founded when he saw how many patients within the community were in need. www.stlukesmedicalclinic.org

Michael John Patrick Lynch, 76, loyal and loving husband, generous father, &#8220;naughty grandpa&#8221; and papa to many passed away Monday, August 12, 2019. He lived his life to the fullest with a generous and caring attitude and a love of... View Obituary & Service Information

The family of Michael John Patrick Lynch created this Life Tributes page to make it easy to share your memories.