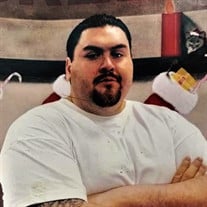 Michael Andrew Marine (Mike, or Big Mike) age 40, born February 10th, 1979 in Fort Collins passed away unexpectedly of a massive heart attack in Fort Collins, Colorado on December 4th, 2019. Born to Vivian Gail Marine of Colorado and Brian Miller of California. Vivian raised Michael as a single mother. Michael spent most of his life in Colorado with the exception of a brief time in Glendale, Arizona with his Aunt and cousins. Michael spent his younger years at his grandfather Ernie Marine’s side, learning auto body repair, restoration and painting. He went to Laurel /Harris elementary then to Lesher Junior High, he then attended Centennial High School. He later received a G.E.D. Michael was very family oriented. Anyone who knew Mike, knew how big of a heart he had. He was sometimes referred to as a big teddy bear. With his size 6’6” 340lbs, it was hard not to notice him and for him not to have made a lasting impression on everyone he met. Although he had 2 brothers and 2 sisters, they along with all their first cousins were raised as siblings. He is survived by Grandmother Hope Marine. Sisters Shannon Marine and Betty Jean Marine. Maternal Aunts and Uncles. Lisa and Armand , Jackie, Penny and Fred and Andrea and Chris. Cousins Patrick, Krista, Ashley, Janette, Angel, Julia, Paul, Step cousins Harmony, Rocco, and Patrick. Nieces and nephews Hope, Jeremiah, Jose, Audriana, Josiah, Ailayah, Isabelle, and Robert. Michael was widowed by his late wife Nicole Marine. She shared her 3 beautifully strong daughters Mia, Janaya, and Deme with him and he welcomed them as his own. His life was full of family and when life weighed heavy on Michael’s big broad shoulders he looked to his Grandparents for the courage and support that he needed to help him through. His Grandmother Hope, helped Mike to have a relationship with the Lord and she did so many other things, all for her Mikey. Her love for Mikey was, is and will always be bigger than him. Michael is preceded in death by his beautiful Mother Vivian Marine, Biological Father Brian Miller, Grandfather Ernest Marine, and his Brothers Robert Marine and Andylee Marine. Services will be December 14th, 2019 10:00 a.m. at Citipointe Church 5656 McWhinney Blvd Loveland CO 80538 South Loveland Outlet mall (just west of the Nike store). Thanks to Goes Funeral Home for their arrangements and cremation services. A special thanks to all that have made donations collected and accepted by “The Michael Marine GoFund Me”Thank you to everyone who may come to celebrate the life of Michael Marine. The Marine Family

The family of Michael Andrew Marine created this Life Tributes page to make it easy to share your memories.