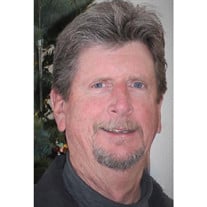 Michael Howard Nagel, born May 20, 1947, passed away December 3, 2021 at the age of 74, after sudden cardiac arrest. He is loved and survived by, his daughter Ashley Nagel, his partner Debbie Jorgenson, his brother James Nagel, nieces and nephew, Samantha, Toby and Donna, Debbie’s mother, Jean, and Debbie’s, son Nate. Mike had an inquisitive mind, a man of science, as well as spirituality , and will be remembered for his warm laugh, kind eyes, and dry sense of humor. Born in Buffalo, New York, he grew up in California where he earned his degree in Public Planning after serving in the United States Army as a Helicopter Pilot. His time in the service inspired his life-long love for aviation. He moved to Denver, Colorado with his family in September of 1990. Mike had a full life and wasn’t afraid to try new things. He was an entrepreneur in the Golf Industry, and finished out his working career in Oil and Gas. Mike was fortunate to meet his life partner Debbie Jorgenson in 2011 in Fort Collins, Colorado. He spent his last years on Earth, enjoying her company, companionship, and love. He was such a good friend. He fit right in with all of the Fort Collins crew. He loved getting together with the guys on Tuesday nights to talk about “guy” stuff and politics. He enjoyed going to the shooting range to try out the newest firearm he had gotten, and he loved going to the RC Club to fly his airplanes. He was very proud of his service time in the army, and had such respect for those who served. Mike would agree that he led a blessed life. There will be no service, but we will be having a celebration of life gathering in May around what would have been his 75th birthday. In lieu of flowers, please consider a donation to a Veteran’s Organization: Veteran’s Plaza Northern Colorado By mail to : Veterans Plaza P.O. Box Q Fort Collins, CO 80522 Wounded Warrior Project Online: https://support.woundedwarriorproject.org/default.aspx?tsid=10043&ovr_acv_id=5246 By mail to: Wounded Warrior Project P.O. Box 758516 Topeka, Kansas 66675-8516 Tunnel to Towers Organization Online to: https://dogood.t2t.org/give/320847/#!/donation/checkout By Mail to: With designated form: https://t2t.org/wp-content/uploads/2017/04/2021_Donor_Form_Final.pdf 2361 Hylan Boulevard Staten Island, NY

Michael Howard Nagel, born May 20, 1947, passed away December 3, 2021 at the age of 74, after sudden cardiac arrest. He is loved and survived by, his daughter Ashley Nagel, his partner Debbie Jorgenson, his brother James Nagel, nieces and nephew,... View Obituary & Service Information

The family of Michael H. Nagel created this Life Tributes page to make it easy to share your memories.