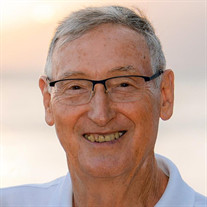 Michael David “Dave” Rich, age 74 of Windsor, Colorado went home to be with His Lord and Savior on April 25, 2022. Dave was born July 10, 1947, in Savannah, Tennessee, the eldest of four children born to Emory and Mary Catherine Rich. He attended the University of Tennessee in Knoxville where he received his BS in Food Science. Between his Junior and Senior years, he met Julie Johnson while working a summer job/internship at General Foods in Kankakee, Illinois. Dave and Julie were married October 4, 1969, in Kankakee and began their life together. Dave worked in the Quality Control Department at General Foods in Kankakee, IL and Lafayette, IN. General Foods later became Kraft Foods. In 1990 he transferred to Corporate Quality in the Chicago area as a Quality Manager where he finished out his career. He retired in 2006 after 37 years with the same company. Among a variety of others, some of the notable foods he made sure were safe to consume were, Gaines Pet Food, Stove Top Stuffing, Jell-O Pudding Pops, Kraft Cheeses, and many Nabisco products. Church and family were always first in Dave’s life. Over the years, he served as a Deacon, an Elder, an Usher, and helped start a church in Lafayette, IN. After moving to CO, he attended Faith Church in Fort Collins. In addition, he enjoyed golf, working in his yard/gardening, and following his favorite sports teams. Dave is survived by Julie, the love of his life for over 52 years; two sons and their families, Matthew and Jodie Rich and their children Micah and Lilly of Peoria, AZ and Andrew and Carrie Rich and their children, Emma and Kayla of Broomfield, CO. He is also survived by his three siblings, Carol (and Danny) Harris of Savannah, TN, Lonnie (and Lou) Rich of Pensacola, FL and Jana Rich of Murfreesboro, TN; a nephew, Wesley (and Mitzi) Harris of Savannah, TN; and numerous other nieces, nephews, and cousins. In lieu of flowers, memorials can be made to Samaritan’s Purse, Feed My Starving Children, and/or Answers in Genesis. A memorial service will be held on June 13th, 2022 at 11:00am, at Faith Church, 3920 South Shields Ave., Fort Collins, CO. Memorial contributions in memory of Dave can be made to the following organizations: Samaritan’s Purse P.O. Box 3000 Boone, NC 28607-3000 samaritanspurse.org Feed My Starving Children 401 93rd Ave NW Minneapolis, MN 55433 Fmsc.org Answers In Genesis P.O. Box 510 Hebron, KY 41048-0510 AnswersinGenesis.org

The family of Michael (Dave) Rich created this Life Tributes page to make it easy to share your memories.