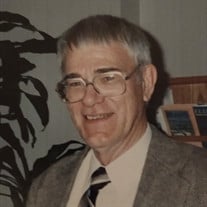 On August 14, Dr. Mike DeYoung passed into glory surrounded by his loving family. Born on November 4, 1924 in Chicago, IL while his father was in medical school, he was raised and lived in Sparta, MI. He was an active high school football player, president of his senior class, and worked his father’s dairy farm with his brother Ken for many years. He had just turned 17 at the onset of WWII. He began college at Hope College in Holland, MI but after 3 years elected to enlist in the US Navy, serving from 1944 through 1946. With his GI bill he completed his college studies at the University of Michigan and subsequently went on to medical school there, graduating in 1951. He went on to complete his internship and residency at Colorado General Hospital (now the University of CO) in Denver. While there he met and married his first love, Barbara Baker. They returned to Sparta, MI in 1955 where he practiced medicine alongside his father and where the first 3 of his children were born. In July of 1964 he moved his family to Fort Collins, CO, a bustling town of 30,000 people, where his 4th child was born and he practiced family medicine for another 25 years before his retirement in 1989. He was honored and proud to be a part of a vibrant and growing medical community where quality and leading edge care was developing and being provided. He served as the medical Chief of Staff in 1980 at Poudre Valley Memorial Hospital and saw the first CT scanner installed there. He especially loved his practice of obstetrics and delivered many babies there. He especially loved his practice of obstetrics and delivered many babies during his years, many of whom he went on to attend their weddings and starting families of their own. He retired with many precious memories and lifelong friendships. He did then go on to practice again at the Lakota Pine Ridge Indian reservation in South Dakota for another 6 years where he lived his love and fascination with Native Americans and the history of the west. He lost his beloved wife of 53 years to cancer in 2009 but heaven sent another angel by the name of Susan Olson whom he married and had 8 of the most special years of his life. He had a lifelong passion for hunting and enjoyed many trips throughout the US, Canada, and Alaska. He was successful in going annually throughout his life, including his last Elk hunt this past fall and leaves us all with a full freezer. He would want all to know of his love and commitment to our Lord Jesus Christ who revealed himself to him in a special and profound way as a younger man. He made every effort to live his life showing Christ’s love and compassion to those he knew and had the honor of caring for, including his family and many friends. He leaves an eternal and lasting legacy in that right. And now he has run the race and claims the prize for which he was called. His eternity is secure in the love and the presence of our God and Lord Jesus. He will live forever in our hearts and minds. Mike is survived by his wife Susan DeYoung; four children, Dr. Douglas DeYoung, Debbie (Barry) Denison, Sarah (David) Janzen, and Cheryl (Wendell) Ellerman; eight grandchildren; and two great grandchildren. He is also survived by his sister Joan Hinkamp, brother Ken DeYoung, and sister, Marcia Stegenga, along with many nieces and nephews. He was preceded in death by his parents, his youngest brother, Paul, and his first wife Barbara. A memorial service is planned for 1:30 pm, Saturday, September 8th at Morning Star Church in Red Feather Lakes.

On August 14, Dr. Mike DeYoung passed into glory surrounded by his loving family. Born on November 4, 1924 in Chicago, IL while his father was in medical school, he was raised and lived in Sparta, MI. He was an active high school football player,... View Obituary & Service Information

The family of Mike DeYoung created this Life Tributes page to make it easy to share your memories.

On August 14, Dr. Mike DeYoung passed into glory surrounded by...