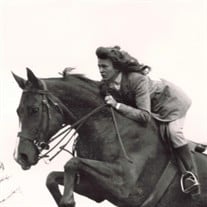 As she wished, Nancy Wild died at home in her sleep on June 2 at age 87 after fighting terminal illness. “She used to be wild and loved to jump on a horse and ride like the wind, then she became Somebody’s Mother and was transformed into an obsessive neurotic.” This was Nancy Wild’s favorite quote by Garrison Keillor. At age 15, with money intended for a saddle, she bought her first horse at auction. By waitressing and working in a stable, she kept it. She graduated from State College, PA High School and Penn State University. She helped organize and rode in the first inter-collegiate 3-day jumping event (Olympic style). Living out west, she couldn’t contain herself watching two cowboys unable to ride an unruly horse. She said, “Gimme that horse,” and within minutes was riding it under control. After marriage to Lowell McEwen at Valley Forge, PA in 1954, they lived in several states before arriving in Colorado in 1961. She usually worked at universities along the way. After moving to Fort Collins in 1976, she worked at CSU before her successful career as Technical Editor for the Colorado Division of Wildlife. Born to Carl and Bessie Wild in Bellefonte, PA, she had an interest in landscape architecture like her professor father. She always beautified her homes with plantings. Nancy is survived by her husband of 66 plus years, Lowell McEwen; sons, John McEwen of Fort Collins and Bill McEwen (Christy) of Eagle; and daughters, Anne Hendrickson (Kyle) of Ames, IA and Stephanie Smith of Grand Junction, CO; also 6 grandchildren, Tony Hendrickson, Sean McEwen, Ayla Hendrickson, Latham Hendrickson, Jake McEwen, and Natalie McEwen; brother, Bill Wild (Mary Jane); nieces Robyn Wild (Alex), and Leigh Plue (Bret); as well as many long-time friends in CO and PA. She was preceded in death by her grandson Zachery McEwen. Thank you to all of Nancy’s caregivers, especially to son John; Janna and Helene of Pathways Hospice; and Heidi of ComforCare Home Care. In lieu of flowers, donations may be made to Pathways Hospice in Fort Collins.

As she wished, Nancy Wild died at home in her sleep on June 2 at age 87 after fighting terminal illness. &#8220;She used to be wild and loved to jump on a horse and ride like the wind, then she became Somebody&#8217;s Mother and was transformed... View Obituary & Service Information

The family of Nancy Wild created this Life Tributes page to make it easy to share your memories.

As she wished, Nancy Wild died at home in her sleep on June 2...