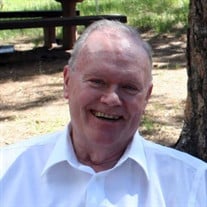 Nicholas Charles Gilbert of Loveland, Colorado passed away on February 24 at the age of 81. He is survived by his wife of 59 years, Virginia Gilbert, daughters Kathleen Banister and Karyn Jensen, sons Glenn Gilbert (Kelly)and Dwight Gilbert (Patty), and grandchildren Myles, Sabrina, Ryan, Rachel, Brayden, Megan, Alexa and Andrew, all residents of northern Colorado. Born in Manhattan, New York in 1939, Nick and his sisters Mabel (Freeman) and Charlene (O’Donnell) were raised in Merion Station, Pennsylvania by his mother, Kirsten Gilbert and his adopted father, Charles Gilbert (both deceased). Nick could speak for hours about the exploits of he and his childhood friends, lovingly referred to as “Little” Dickie, “Little” Johnny and “Little” Freddy (last names omitted to protect the innocent) and his high school job as an usher at a posh Philadelphia movie theater, where he developed a passion for film while making sure that the guests behaved themselves. An exceptional student and athlete in high school and beyond, Nick’s strong desire to serve and protect our nation led him to the United States Military Academy in West Point, New York, where he continued to play lacrosse and football during his time as a cadet. Upon graduating as a second lieutenant in 1961, Nick commenced eight years of service as an infantryman in the United States Army. Not satisfied with just one life change, Nick and Ginny were married in Fruitport, Michigan in December of the same year. As a Green Beret, he fought through the horrors of face-to-face combat during two tours in Vietnam and experienced the extreme tensions at the height of the Cold War first-hand while stationed in Germany. Nick was reluctant to share his wartime experiences with his family, choosing to shield them from sights that could not be unseen, but tough as he certainly was, there is no question that these events had an unmistakable impact on his life. Despite these trials, his devotion to the United States was never shaken. Some of his last words were a repeated prayer of “God bless America.” Nick resigned from military service in 1969, honorably discharged with the rank of Major. In 1977, the call of the mountains proved irresistible, and the Gilbert family moved from Ohio to Longmont, Colorado. Nick served an active role in his children’s education, speaking out against school overcrowding issues, organizing and running the elementary school bicycle rodeo, coaching youth soccer teams, and even serving as a zombie at the school haunted house. He made sure that all the kids learned to ski, hauling Kathleen and Karyn up to Eldora after work for night skiing and patiently waiting around the lodge at Hidden Valley while Glenn and Dwight hit the slopes, even though his body never allowed him to participate himself. The mountains were a constant source of refuge, with as much time as possible devoted to exploring the high country. Finally, after years of weekly trips to Rocky Mountain National Park, the family resettled in Estes Park in 1985, even though it meant a two-hour commute (each way) to his work as a computer systems analyst in downtown Denver. Estes Park is a place that Nick loved and called home for the next 21 years. Even as severe pain from the accumulated injuries and ailments resulting from a life of contact sports, airborne infantry service and combat left him physically unable to work full time, Nick continued to be as active as possible, coaching the line for the Estes Park High School football team in 1991 and 1992, including a surprising playoff run in his last year. In 2006, Nick and Ginny moved down to Loveland, Colorado, where they lived in their home at the base of the foothills until this year. Always a gracious host, Nick always laid out an impressive array of snacks and treats when the family would gather to celebrate birthdays and holidays. A celebration of Nick’s life will be held in Estes Park, Colorado as soon as it becomes feasible for family and friends to gather safely without the encumbrances of Covid-19. The family wishes to thank all those who have shared their love and support. Despite the many physical trials he suffered over the course of his life, Nick always maintained a generous spirit with great empathy for those around him, never hesitating to place the needs of others ahead of his own. In lieu of flowers, please consider honoring Nick’s memory through a donation to a humanitarian cause. Please revisit this page for updates on Nick’s memorial services later in 2021.

Nicholas Charles Gilbert of Loveland, Colorado passed away on February 24 at the age of 81. He is survived by his wife of 59 years, Virginia Gilbert, daughters Kathleen Banister and Karyn Jensen, sons Glenn Gilbert (Kelly)and Dwight Gilbert... View Obituary & Service Information

The family of Nicholas Charles Gilbert created this Life Tributes page to make it easy to share your memories.

Nicholas Charles Gilbert of Loveland, Colorado passed away on...