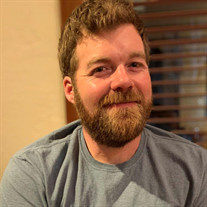 Nickolas James Bennett or Nick to everyone he knew, was 32 years old and lived in Loveland, Colorado. Nick passed into peace early Saturday morning, May 9, 2020 in his home nestled in the Rocky Mountain foothills just outside the city limits of Loveland. Nick was born in Broken Arrow, Oklahoma to Jake and Denise. He grew up with 3 amazing sisters; Tonia, Meghan, and Valerie. Over the span of his life he lived in 9 different states. The one he talked about the most was Hawaii and the fun times he spent sleeping on the beach and hiking all over the island. He talked all the time about growing up on the farms, all the trouble he would get in, and the havoc he and his sisters wrecked on each other. He would smile and laugh when he told those stories, not wanting to admit those were his favorite memories. Nick started work with his dad at the early age of 14. He always said how much he loved working with Jake. He had many different jobs over the years some including: tile and flooring work, shoe making, roofing supply, irrigation and landscape, and handyman work. He loved working outside on whatever project he could dream up. Hailey would always say there wasn't anything that he couldn't do. He was a jack of all trades, and could fix or work on anything. He also loved watching building and construction how-to videos, always wanting to learn more and more. His most recent job was working as a landscape technician for Integrated Site Services. It was the perfect job for him, fixing things with his hands outside. He was the only landscape technician, so he was invaluable to his boss, who loved having Nick apart of the team. Nick came to Fort Collins, CO in June of 2015; the last of his siblings to follow their parents here. He traded in his Chevy Yukon for a 1978 class C camper, nicknamed “the grey goose”, which became his house and vehicle. Nick met Hailey on October 31, 2015 at a Halloween party. Nick had come with a friend and Hailey was meeting her cousin. Thanks to the matchmaking of Hailey's cousin they connected and had their first date the next morning over breakfast. As they say with most love stories, the rest is history. They were inseparable. Nick married Hailey in a beautiful ceremony at Brookside Gardens in Berthoud, CO surrounded by friends and lots of family on June 7, 2018. Nick and Hailey welcomed a beautiful baby boy into the world December 21, 2019, Bodhi James Bennett. Nick became superdad. Bodhi spent the first nine days of his life in the NICU due to some issues from Hailey's Type 1 Diabetes, and Nick became the rock that Hailey needed for her and Bodhi's recovery. Bodhi was instantly the light of Nick's life and his mini-me. We are grateful Nick will live on through our precious boy, Bodhi. Nick was the brightest light and his smile could warm any heart. His laugh was unbelievably contagious and Hailey would tickle him just to hear his laugh. It was her favorite thing even though he didn't like it very much. Everyone that knew Nick, had nothing but amazing things to say and talked about how smart and talented he was. Nick had so many people that loved him and will miss him more than words can express. As most people know, Nick was in a horrible motorcycle accident at 20 years old. From that accident, he had a traumatic brain injury and suffered from constant head pains and migraines. Because of that, his family takes some comfort in knowing that he is no longer in pain. Nick is survived by his wife Hailey Noel Bennett, son Bodhi James Bennett of Loveland, CO, father Jake Bennett of Loveland, CO, mother Denise Spielman of Omaha, NE, sisters, Meghan (Ty O'Day) of Omaha, NE, Valerie (Eric Saylor) of Denver, CO, Tonia (Richard Hall) and nephew Zeek Hall of Coffeyville, KS. Father and mother in law Randy and Teresa Souther of Fort Collins, CO, sister and brother in law Mackenzie and Michael Hudgins of Severance, CO. Nick- I love you the mostest of all infinity and beyond no take backs. -Hailey A private family viewing and cremation has taken place at Goes Funeral Care in Fort Collins, CO. A celebration of life will be held in the future for all of those who want and are able to attend, when we are allowed to gather in larger groups.

Nickolas James Bennett or Nick to everyone he knew, was 32 years old and lived in Loveland, Colorado. Nick passed into peace early Saturday morning, May 9, 2020 in his home nestled in the Rocky Mountain foothills just outside the city limits... View Obituary & Service Information

The family of Nickolas James Bennett created this Life Tributes page to make it easy to share your memories.

Nickolas James Bennett or Nick to everyone he knew, was 32 years...