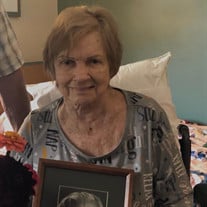 Patricia (Pat) Andersen passed away at the age of 90 on October 5, 2021, in Fort Collins, Colorado. Patricia Anne Golightly was born on December 1, 1930, in St. Thomas, Ontario, Canada, to Thelma Ruth Else and John Anderson Golightly. "Patsy," as she was known in her youth, was raised by her maternal grandmother, Charlotte Else Taylor, and her step-grandfather, Jack Taylor, whom she called "Daddy." Her mother, Thelma, was stricken with tuberculosis and restricted to living in the Queen Alexandra TB Sanatorium in London, Ontario. Pat was raised in the Reorganized Church of Jesus Christ of Latter Day Saints. She was a talented pianist, organist and vocalist. For many years she shared her musical gifts in church congregations in Canada and the United States. She graduated with honors in 1948 from St. Thomas Collegiate Institute where she studied business arts in the 13-year Canadian secondary school system. In 1949, she married John Austin Miles Barr in St. Thomas, Ontario, Canada. She gave birth to two children: Christopher John Barr, born in St. Thomas, Ontario, in 1952, and Carol Angela Barr, born in Wiesbaden, West Germany, in 1954, while Pat's husband, John, was serving in the United States Air Force. Pat was known for her exemplary organizational and clerical skills. She was highly adept at typing, shorthand, taking dictation and composition. She was an executive secretary for most her working career in many positions across the country: Graceland College, Lamoni, Iowa; Oregon State University, Corvallis, Oregon; the Barker Law Firm, Iowa Falls, Iowa; the University of Michigan Graduate School, Ann Arbor, Michigan; and the University of Miami Medical School, Miami, Florida. She received her Bachelor of Arts Degree from Graceland College, Lamoni, Iowa, in 1972, majoring in business education with a minor in music performance. In 1975, she married Calvin Keith McHenry in Miami, Florida. After retiring from the University of Miami, Pat received her real estate license and represented Coldwell Banker on Key Biscayne, Florida, for five years until 1993. In 1994, Pat married Svend Erik Andersen in Fort Lauderdale, Florida. She then became Chief Financial Officer and Office Manager for Svend's company, Jens Rask Construction, in Fort Lauderdale. In 2000, Svend and Pat retired and moved to Summerfield, Florida. For many years, they enjoyed traveling across North America in their RV during the warmer months and they spent the winters at their home in Summerfield. They moved permanently to Fort Collins, Colorado, in 2014. Pat will be fondly remembered by her friends and family for her kindness, her generosity, and her gentle, caring spirit. She was preceded in death by her younger half-sister, Diana Labadie Turner. She is survived by her husband, Svend Andersen; son Christopher Barr; daughter Carol "Angie" Joseph; stepdaughter Vibeke "Tudy" Guterman; grandsons: Miles Barr, Dylan Barr, Jake Joseph and Erik Guterman; granddaughters: Jaime Joseph and Katrina Guterman. A "virtual" memorial for Pat was held via Zoom on November 7, 2021. Close friends and family participated, sharing memories of her life. Scattering of ashes will take place on December 1, 2021, by permit from the National Park Service, near a trail in the Bear Lake / Alberta Falls area of Rocky Mountain National Park.

Patricia (Pat) Andersen passed away at the age of 90 on October 5, 2021, in Fort Collins, Colorado. Patricia Anne Golightly was born on December 1, 1930, in St. Thomas, Ontario, Canada, to Thelma Ruth Else and John Anderson Golightly. "Patsy,"... View Obituary & Service Information

The family of Patricia Andersen created this Life Tributes page to make it easy to share your memories.

Patricia (Pat) Andersen passed away at the age of 90 on October...