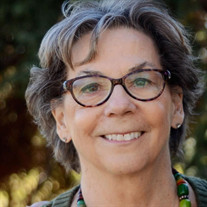 On August 29th, 2020, Patricia (Pat) Bohling Smith, loving wife, mother, and Nana passed away to the Lord at the age of 67 after a courageous fight against cancer. Pat was born on April 20, 1953 in Hammond, IN to Warren and Margaret (Grunhard) Bohling. On August 22, 1981 she married Robert Smith and they recently celebrated their 39th wedding anniversary. They raised a daughter and a son, René and Doug, along with many dogs, cats, and some feathered friends through the years. Pat graduated from Holy Cross School of Nursing in 1974 and later attended Metropolitan State College and the University of Colorado to receive her Bachelor of Science (1979) and Master of Science (1985) degrees. Pat was passionate about helping others through her work and volunteer pursuits. She was a registered nurse at Poudre Valley Hospital for 35 years before retiring as the Service Line Director for Women and Family Care in 2014. After retiring, she was the Administrator for the Colorado Perinatal Care Quality Collaborative. Pat volunteered at many organizations over the years, and most recently gave her time at the Larimer County Food Bank and Wellington Library Friends organization. Pat enjoyed travel and spending time outdoors, including jeeping in Moab, water sports at Table Rock Lake in Missouri, and international travels to Tanzania and Europe. She also loved trying new recipes and cherished her time with her family and many friends, whether it was outings with her grandchildren or gatherings with those she loved. Pat was known for her kind and generous spirit, sense of humor, and love for others. Pat is survived by her husband Robert, daughter René Davison (Andrew), son Doug Smith (Christy Schultz), grandchildren Cora and Charlie Davison, sisters Dianne Harrington and Suzanne (Ray) Fumi and many nieces and nephews. She was preceded in death by her mother, father, and brother Peter. A Rosary will be held at 1:30 pm, followed by a Memorial Mass at 2:00 pm, Friday, September 18 at St. Joseph Catholic Church in Fort Collins. Seating at the Mass will be limited by social distancing, but friends in lower risk categories are invited to join us in person. The service will also be streamed live online at either of the following sites: https://www.facebook.com/StJosephChurchFC/ https://www.youtube.com/channel/UCfTYqQ96sVNl3ED-UZFF0eA Private interment will take place at a later date. In lieu of flowers, donations can be made in Pat’s name to the UCHealth Northern Colorado Foundation Oncology Patient and Family Support assisting cancer patients with the financial burdens associated with treatment.

On August 29th, 2020, Patricia (Pat) Bohling Smith, loving wife, mother, and Nana passed away to the Lord at the age of 67 after a courageous fight against cancer. Pat was born on April 20, 1953 in Hammond, IN to Warren and Margaret (Grunhard)... View Obituary & Service Information

The family of Patricia "Pat" Bohling Smith created this Life Tributes page to make it easy to share your memories.