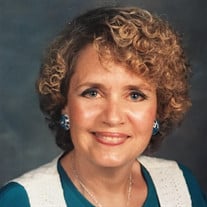 Patricia Arleen Williams (Patty) was born in Humacao, Puerto Rico on April 23, 1937 to Ralph and Lucille Mugrage. She was born the second of four children and has an older sister Kay and younger siblings Sharon and Michael. She lived in Puerto Rico for her first 10 years, fluently learning and using Spanish as her second language in the years to follow. She also spent time in Boston, MA, Bremerton, WA and in Athens, Greece before settling with her family in Riverside, CA. Patty was always a bright student and had an interest in medicine; in 1958 she earned her degree from the University of California Riverside. A few months after graduation, Patty married Robert Rychlik and raised three children - Mark, Mike and Cindy. The family lived in Chicago, New Jersey and North Carolina before settling in Palo Alto and Los Altos, California. After completing nursing school in 1974, Patty worked as a Registered Nurse at El Camino and Stanford Hospitals for many years. Patty loved to sing and was a tenor in barbershop quartets and an alto in many choirs. If you didn’t hear her belt out a Rodgers and Hammerstein musical number, you could hear her sing a folk song or a favorite hymn. When not making up her own harmony, Patty would often sing any of the four various vocal parts in an orchestrated piece of choral music. She worshiped at Peninsula Bible Church, Menlo Park Presbyterian Church, where she was very active in support groups and other ministries, and at Bridges Community Church. Patty always believed the best in people and those around her always felt her warmth and love. Patty loved Springtime flowers – daisies, poppies, pansies, petunias, and loved to tend to her rose garden as her mother had before her. Patty married Tom Williams in 1998 and became a part of his family of three children - Steve, Amy and Bill. Patty and Tom loved to entertain and sing and worship together. Patty loved animals and in particular, she loved dachshunds. These fiercely loyal, tenacious and lovable little dogs were a part of her youth and she shared these dachshunds with her growing family. Patty was very loved by everyone who knew her and will be deeply missed. She is survived by: her loving husband, Tom, her three siblings, her three children, her three stepchildren, her eight grandchildren, her four grand-puppies and her three great-grandchildren. Patty is now with her Lord and Savior, Jesus Christ, praising Him with the angels in His heavenly choir. A celebration of Patty’s life is scheduled for 2pm Monday, November 11 at Menlo Church, 950 Santa Cruz Ave, Menlo Park, CA 94025.

Patricia Arleen Williams (Patty) was born in Humacao, Puerto Rico on April 23, 1937 to Ralph and Lucille Mugrage. She was born the second of four children and has an older sister Kay and younger siblings Sharon and Michael. She lived in Puerto... View Obituary & Service Information

The family of Patricia "Patty" Williams created this Life Tributes page to make it easy to share your memories.