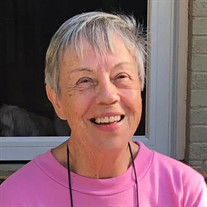 Patricia Ann Schneller was born on July 18, 1941, to Davis and Daisy (Thomas) Patterson in Hastings, NE. Patricia loved to sing and play with her brother Johnny. She was active in a Lutheran Church growing up in Hastings where she sang in the church choir which became a lifelong hobby. She met her husband Keith R. Schneller from Sutton, NE during her senior year of high school. They made a wonderful pair and were married in 1959. Keith R and his brother took over their father’s land leveling business soon after they were married, so they set up home in a small trailer house in Sutton, NE where they started their family business. The family had to move from job to job which took them from eastern Nebraska across the plains where they eventually settled in Holyoke, CO in the late ‘60’s and started farming. Little Keith was born in Hastings, NE in 1961, Mark was born in McCook, NE in 1963, Bryan was born in Lamar, CO in 1966, and Matthew was born in Holyoke in 1977. Patricia took on the responsibility of managing a household of four little boys for many years. Keith and Pat made a great team and made sure their kids made it to Mt Zion Lutheran Church every Sunday while they were growing up. Patricia became a loyal choir member with her beautiful soprano voice at the church in Holyoke. After many years of successful farming, Keith and Pat lost their farm in 1985 and were divorced. Patricia had run a small travel agency on the side while Keith was farming and moved to Alaska to work at a Princess Cruise Lines Lodge on the Kenai Peninsula. This is where she ran into Joe Paloucek who was a widower from Holyoke who also loved traveling to Alaska every year for fishing trips. Patricia and Joe were married in 2003. Pat and Joe enjoyed many wonderful years of fishing in Alaska, cruising around the globe, and enjoying the sunshine at their home in Phoenix, AZ. Patrcia was a very sweet person with a passion for traveling and helping others. She will be sorely missed. She is survived by her mother Daisy in Hastings, NE, her four children: Keith (Julie) of Fargo, ND, Mark (Mary Ann) Castle Rock, CO, Bryan (Deb) of Fort Collins, CO, and Matthew (Tini) of Cranberry Township, PA; nine grandchildren: Benjamin, Anna, Emily (Tony), Jake, Keighton, Taylor, Qaddie, Qaizar, and Aislynn; one great grandchild: Elle; and many nieces, nephews, other relatives and friends. Patricia was preceded in death by her father Davis, brother Johnny, husbands Keith and Joe. Patricia passed away at Collinwood Assisted Living Home in Ft Collins, CO on Saturday, January 8, 2021 surrounded by three of her boys after a brave fight with Dementia. At her request, there will be no funeral or memorial service. Instead, she asked that we scatter her ashes in Alaska, the Rocky Mountains, or in Cozumel, three of her favorite places on this earth. We will cherish her memory.

Patricia Ann Schneller was born on July 18, 1941, to Davis and Daisy (Thomas) Patterson in Hastings, NE. Patricia loved to sing and play with her brother Johnny. She was active in a Lutheran Church growing up in Hastings where she sang in... View Obituary & Service Information

The family of Patricia A. Schneller created this Life Tributes page to make it easy to share your memories.