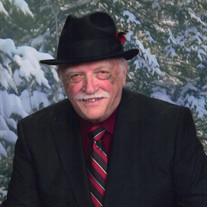 Paul Arthur Lucia, 83, of Fort Collins, passed away on May 3, 2021 at his home. Paul was born in Pennsylvania in 1937 to parents Frank and Jeanette Lucia. He grew up in Youngsville and attended Youngsville high school. After serving in the Air Force he than moved to Louisville, Kentucky. It was here he went on a fateful blind date with his future wife, Nancy Hickman. They were married on June 14, 1963 at Saint Paul Methodist Church in Louisville. Their two children, Dan and Kim, followed several years later. He held a supervisory role at UPS for 10. In 1973, the family moved to Longmont Colorado, where Paul and his brother Chuck bought a furniture sales business, Newline Furniture. He continued in furniture sales for Holiday Inn, where for one year he was the top salesman in the country. After retirement was a much-loved driver for individuals at Foothills Gateway. Paul was genuinely interested in other people. In the span of just a few minutes and a handful of questions, he got to know a person, and more than that, he grew to care about them. In turn, he was known as a trusted friend, and someone who was so very likeable. He never had anything bad to say about another person. His children will cherish the memories of him taking them hiking and skiing. He was always there to encourage them growing up and he continued that loving support with his grandchildren. The family loved to gather to watch football, especially the Broncos. In recent years, he also enjoyed connecting with people on Facebook, including old friends from high school and new friends as well. Paul was a member of the Saint Spyridon Orthodox Church in Loveland, Colorado, where he and Nancy have found a loving faith community. Paul is survived by his wife of 57 years, Nancy; his two children, Dan (Karen) Lucia, and Kim (Gary) McIntosh; and grandchildren, Chris, Kristina, Aaron, Sophia, and Symeon; as well as a brother, Dave (Joyce); 3 sisters, Mary (Jim), Rosann, and Kitty. He was preceded in death by 3 brothers John, Chuck, Frank and his parents. Paul’s funeral service will take place at 11:00 am, Thursday, May 6, 2021 at Saint Spyridon Orthodox Church in Loveland. It will also be streamed online for those unable to attend. A reception will follow the funeral and serviced will conclude with interment and military honors, to be held at Highland Cemetery in Wellington. In lieu of flowers, donations may be made in honor of Paul to St. Jude Children's hospital: https://www.stjude.org/give/memorials-and-dedications.html?sc_icid=wtg-mm-memorial-giving A recording of Paul's funeral service is available at the following link for those who were unable to attend or access it they day of the funeral: https://youtu.be/Rshdxbfdfcw

Paul Arthur Lucia, 83, of Fort Collins, passed away on May 3, 2021 at his home. Paul was born in Pennsylvania in 1937 to parents Frank and Jeanette Lucia. He grew up in Youngsville and attended Youngsville high school. After serving in the... View Obituary & Service Information

The family of Paul Arthur Lucia created this Life Tributes page to make it easy to share your memories.