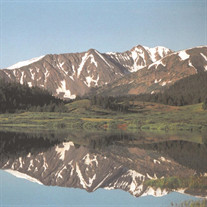 Paul was born in Loveland, Colorado, the only son of Carl and Dorothy (Whiteside) Thomsen. His love for the outdoors grew from time spent exploring Crosier Mountain with his dog Val. He graduated from Loveland High School, attended Colorado Agricultural College (CSU, Aggies), followed by Colorado School of Mines, majoring in Geology. Foreign oil exploration (Mobil Oil) was where he accepted his first job, with assignments taking him to the continent of South America and to the Middle East. Working as Party Chief, Paul’s responsibilities included surveying and establishing work camps for the general welfare of the work crews. Free time was spent touring Europe which encouraged his wanderlust for culture, cuisine, and the arts. Back to the States, he was employed as a Civil Engineer with Stearns-Roger in Denver. During this time, Paul met the love of his life, Laurie. Their union has lasted 50 years. Paul joined Laurie in Maryland where he continued his work as a Civil Engineer. During the six Maryland years, they enjoyed varied cultural performances at the Kennedy Center in Washington, DC, as well as taking in the Rich History of the surrounding areas. Returning to Colorado, Paul was employed at Ft. Collins Cement Plant for over 20 years. He had various responsibilities that included more travel, much to his liking. Hiking, hunting, camping, fishing and family fulfilled Paul’s free time once back in his beloved Colorado. Paul will be greatly missed by all who knew him. He never failed to set an admirable example of honesty, integrity and fairness and he always did so with such a quiet dignity. In memory of Paul and his love for the outdoors and hunter safety, please consider making a donation to Colorado Youth Outdoors. Please use the link below to make one online or the address to send by mail. Online: https://www.coloradoyo.org/donate/ or By mail: Colorado Youth Outdoors Attn: Sarah Mickelson 4927 East County Road 36 Fort Collins, CO 80528 Please include a note, both online and by mail, to direct donation to hunter safety program in memory of Paul Thomsen.

Paul was born in Loveland, Colorado, the only son of Carl and Dorothy (Whiteside) Thomsen. His love for the outdoors grew from time spent exploring Crosier Mountain with his dog Val. He graduated from Loveland High School, attended Colorado... View Obituary & Service Information

The family of Paul E. Thomsen created this Life Tributes page to make it easy to share your memories.

Paul was born in Loveland, Colorado, the only son of Carl and...