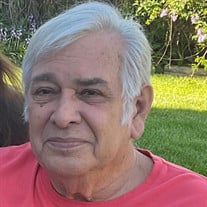 Quentin Randall Shelley, “Q” to his family and friends, age 71 of Loveland, Colorado, died December 19, 2021 at Medical Center of the Rockies, in Loveland. The viewing will begin at 1: 00 PM; funeral service will be held at 2:00 PM Thursday, Dec. 30, 2021, at Lifespring Covenant Church, 743 Dotsero Dr., Loveland. Military honors will conclude Quentin's service followed by cremation. Quentin was born in San Diego, CA to Billy Joe and Mary Shelley. As a child his family moved to Strafford, MO. The family later went back to California, where they lived in San Jose, Sacramento and Los Angeles before moving to Loveland in 1970. He served in the U. S. Navy as a Petty Officer 3rd Class. He was a glorified cook (his word) aboard the USS Ranger during the Vietnam War. In the early 1970’s “Q” met Jerelyn Williamson while working at the Dude Corral in Loveland. They were married in 1976 and have made a life here in Loveland. He graduated from Colorado State University with a degree in Business Management and worked for Hewlett Packard as a Laboratory Tech. When his division sold to Merix Corporation, he continued as a Lab Tech working his way up to Engineer before he finished his career. Quentin enjoyed many activities in his life including golf, fishing, boating, riding his motorcycle and photography. He was an antique car enthusiast. He spent countless hours working on the Shelley genealogy. It was a true passion for him learning the history of his ancestors. He was a Promise Keeper and was active at Lifespring Covenant Church with the Men’s ministry. Quentin is survived by his wife of 45 years, Jerri; three children, Jennifer (and David) Pence of North Carolina, Scott (and Rachel) Shelley of Loveland and David (and Erin) Shelley also of Loveland; his mother, Mary Ley of Strafford, MO; three sisters, Cindy Shelley, Lydia Shelley and Amelia Shelley (and Jim Reuss); his brother, Marcus Shelley (and Irene); grandchildren, Rachel and Aaron Pence, Dakotah, Joshua, Travis and Gabriel Shelley and Ben, Hyrum, Adam, Levi and Angela Bickerstaff, and several nieces and nephews.

The family of Quentin Shelley created this Life Tributes page to make it easy to share your memories.

Quentin Randall Shelley, “Q” to his family and friends, age 71...