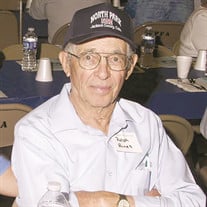 Ralph Edward Hines, age 93, of Walden, Colo., passed away Oct. 17, 2021, at Seven Lakes Memory Care Center in Loveland, Colo. Ralph was born in Poplar Bluff, Missouri, June 10, 1928 to parents Walter Edward and Iva Tennessee (Dawson) Hines. Ralph’s dad was something of a nomad, so Ralph spent much of his childhood moving from place to place. He had two brothers and four sisters, who would regularly pile into their dad’s old International truck on their way to the next adventure. Despite the fact that he never settled in any one school for long, Ralph was very intelligent. He became interested in motors early on and later became an auto-mechanic. He enjoyed working with engines and problem solving even after retirement. He worked on cars, tractors, anything he could get his hands on. It was in Cimarron, New Mexico that Ralph met Emma Martinez and the two were married on August 30, 1948. In 1951, they moved to Walden, where Ralph’s sister and her family lived. The local timber business had an opening for a mechanic, and the valley seemed like a great place to settle. Ralph and Emma raised their two children in Walden. They had family nearby – Ralph’s sister, Mildred and his brother Ray. And there was plenty to keep them busy. Besides his work, Ralph enjoyed stock car racing, snow-mobiling, hunting, fishing, camping, and playing cards. In the 90s, Ralph and Emma started taking their RV down to Yuma, Ariz., and in retirement, they enjoyed the snowbird lifestyle, escaping to the sunshine during the winter months. Ralph will be remembered as a hard worker, a man of integrity who was never afraid to get his hands dirty. He served on the Walden Town Board and the Jackson County Volunteer Fire Department. He participated in league bowling, cribbage tournaments, World Series Pools and worked on most everybody’s cars, trucks, tractors, hay equipment, chain saws, pumps or machinery that needed help. He and Jack Peterson even had a patent on a toolbox. Ralph was preceded in death by his wife, Emma Martinez Hines; his parents Walter and Iva; brothers Clifford Gerald and Winfred Ray; sisters Mildred Imogene Bradley, Betty Lou Montgomery, and Ruby Lee Berry. Ralph is survived by: sister Judy Ann O’Neal; children Patty (Carl) Shuler and David (Joellyn) Hines; grandchildren, Nate (Vanessa) Hines, Adam (Beth) Shuler, Marcie (Casey) Clendenen, Joie (Doug) Thacker, Matt (Michelle) Shuler, great-grandchildren, Kailyn Shuler, Arlo Shuler, Emma Clendenen, Reese Thacker, Blaise Thacker, Clay Shuler and Kate Shuler; and nephew Darl Gene Peterson. He is survived by many nephews, nieces, friends and customers. A service will be held Friday, Oct. 22, at 1 p.m. at the North Park Community Church. Interment will take place after the service at the Jackson County Cemetery north of Walden. A reception will be held in Brunner Hall at the North Park Community Church after the interment. In lieu of flowers donations can be made in his name to the North Park Fire Rescue in Walden.

The family of Ralph Edward Hines created this Life Tributes page to make it easy to share your memories.