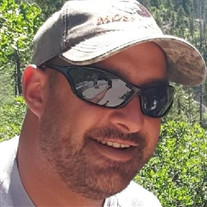 Rhyan Lakota Kahler, 42 when he passed away unexpectedly on Wednesday, December 18th, at his home in Fort Collins. He was an adored and loving father, son, brother, uncle and friend. Born in Larimer County, Rhyan became the foster child of Peter and Georganne Kahler who anxiously waited for legalities to clear the way for them to joyously become his adoptive parents. Pete and Georganne gave Rhyan the middle name of Lakota to honor his Sioux heritage. Even as an infant, his athletic ability became evident; Rhyan walked at 10 months. He started playing soccer in grade school and it became his passion. He progressed from recreation soccer and was accepted to play for the Stingers Soccer Club through Junior High, and eventually played for Evergreen High School. The highlight of his soccer experience was being chosen by the Lakewood Fury Soccer Team to travel on an Adidas sponsored South Pacific Tour. They played games in Tahiti, Australia, New Zealand, Fiji, and Hawaii. In 2001 he married his high school sweetheart, Amber Suppi and they had two children together, Mason Takota age 13, and Cole Koda age 8. Cole, with his cute smile, called the 3 of them (including his Dad) the “Koda Kids.” Although Rhyan and Amber divorced 16 years later, they have remained friends, sharing equally the time and responsibility of parenting. Rhyan was totally devoted to his sons. Continuing his love of soccer, Rhyan nurtured the boys’ soccer skills, taking pride in their accomplishments. He took them to practice, even helping as an assistant coach for Mason when one was needed. He never missed a game, unless schedule conflicts made it impossible to attend the games of both sons. In addition to organized sports, Rhyan’s favorite activities involved his boys, hiking, biking, playing Ping-Pong in the garage, going down to the river or the park, snowboarding, and spending time with Rhyan’s special friends and their families. Always a hard worker, Rhyan began learning carpentry skills in Evergreen High School’s Building Trades class. As a group, the class built a beautiful home, doing all of the actual construction and finish work. Rhyan worked for several companies throughout his career, each one adding to his knowledge and skill. He worked for Zach Ikeler building custom and spec homes. Next, Rhyan further honed his carpentry skills while working 12 years for Harry Polman’s Construction Company. Rhyan always took immense pride in his work and became a consummate carpenter, one of the few workers Harry kept during a major economic downturn in construction. For the last several years, Rhyan enjoyed working as an independent contractor for Nicholas Steffen’s Optimum Builders, specializing in finish carpentry. Nick and Rhyan developed a special friendship and collaborated on construction matters. One of the last major projects, heavily dependent on Rhyan’s knowledge and skill, was building Nick’s new home. Rhyan is survived by parents, Georganne and Pete, sons, Mason and Cole, brother, Rhone, nephew and niece, Jacob and Cloey, Uncle Bill Von Vihl and Aunt Patti, cousins, Becca Von Vihl, Laura Malone, and Katie Kloska, Aunt Debbie Von Vihl and Uncle Mike, Aunt Mary Kahler, Aunt Margaret Ann Sheer and Uncle Tom, Uncle Ron Kahler and numerous other cousins and great aunts, enjoyed at family gatherings and reunions. In honor of his Sioux heritage, he is survived by his birth mother Mary Murray, half-sister, Leah Murray, half-brother, Sean Murray, and grandmother, Lois Marie Raymond. A celebration of Rhyan's life will be held beginning at 11:00 AM, January 11th, 2020 at Club Tico in Fort Collins. The service will include some inspirational readings, eulogy, and an opportunity for friends and family to share memories and tributes to Rhyan. Lunch will be served following the service.

Rhyan Lakota Kahler, 42 when he passed away unexpectedly on Wednesday, December 18th, at his home in Fort Collins. He was an adored and loving father, son, brother, uncle and friend. Born in Larimer County, Rhyan became the foster child of... View Obituary & Service Information

The family of Rhyan Lakota Kahler created this Life Tributes page to make it easy to share your memories.

Rhyan Lakota Kahler, 42 when he passed away unexpectedly on Wednesday,...