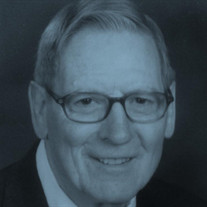 Richard L. Corl, age 84, died from complications of Parkinson’s on December 18, 2016 at the Good Samar¬itan Society in Fort Collins, Colorado. He was born in Elwell, Michigan to Cliden and Nellie (Baker) Corl, and is survived by a sister, Luci¬lle (Corl) Carlson. Richard graduated from high school at age 16 and then attended General Motors Institute where he majored in Engi¬neering. In 1952, Richard met Helen (Cate), who was to be the love of his life and wife for 61 years. Richard enlisted in the Air Force, and he and his bride moved to San Antonio, Texas to complete his enlistment. Richard retired from Gen¬eral Motors after over 37 years of service, and in 1988 they moved to Fort Collins, Colorado. He is survived by three children, Mary Ann (Corl) Ryan (John), Richard Corl (Lori) and John Corl (Cindy), nine grandchildren, ten great-grandchildren and his beloved dog Beauly. Richard had many hob¬bies such as camping, fish¬ing and woodworking. He was known to all as selfless and generous, volunteering his time to a variety of ser¬vice organizations such as the Lions Club, Poudre Val¬ley Hospital and the Lincoln Center, and donating over 36 gallons of blood in his lifetime. He was a Master Mason and was active in his church. A Memorial Service will be held at Christ United Methodist Church in Fort Collins, on Wednesday, De¬cember 21st at 2:00 p.m. Memorials can be made to the Good Samaritan Soci¬ety, Christ United Method¬ist Church or the Larimer County Humane Society.

Richard L. Corl, age 84, died from complications of Parkinson&#8217;s on December 18, 2016 at the Good Samar¬itan Society in Fort Collins, Colorado. He was born in Elwell, Michigan to Cliden and Nellie (Baker) Corl, and is survived by a sister,... View Obituary & Service Information

The family of Richard Leroy Corl created this Life Tributes page to make it easy to share your memories.