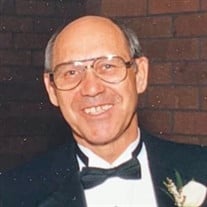 Richard “Dick” Lee Flot passed away peacefully at Poudre Valley Hospital on May 11, 2020, at the age of 86. Dick is survived by his beautiful, loving wife Ann Flot; children Shawna Eisele (Bill), Kristi Savignano (Jon), Laurie Flot, and Mike Flot (Amy); grandchildren Connor Church (Olivia), Elizabeth Schmidt, Olivia Flot, and Nicolas Savignano. He was preceded in death by his parents, Fred and Alvina Flot, as well as his brother Marvin “Gus” Flot. He is survived by his sister Kathleen Flot. He was born on September 12, 1933 in Kersey, CO, and graduated from Kersey High School in 1951. He joined the Army in 1953, and after an honorable discharge, went to work for Mountain States Telephone Company (became Mountain Bell and later Century Link) as a telecommunications repairman. He retired as a manager after 38 years of service at the telephone company. He then took on a “retirement job” at St. Joseph’s Parish doing maintenance for the church and school for several years. The students and staff sure loved him! Dick married Ann Doherty on June 16, 1957, and they moved to Fort Collins in 1960. He was devoted to his wife and children and worked hard to support them. His steady work ethic and attention to detail were admirable. He was an avid sportsman and played competitive softball and basketball. Dick and Ann were big Rockies, Broncos, and Nuggets fans and loved to watch the games together. He enjoyed reading books, especially those of Clive Cussler and John Grisham, as well as western novels of all kinds. Western movies were also a favorite. Dick and Ann enjoyed maintaining their home in pristine condition. He was an involved parishioner at Saint Joseph Catholic Church and School and was a Grand Knight for the Knights of Columbus. Dick was a charitable man who dedicated his life to his family and faith. His smile, laugh and interactive personality will be deeply missed by his family and friends. Burial was held at Fort Logan National Cemetery, Denver. A Memorial Mass and military commitment ceremony will be held at 2:00 pm Friday, August 14, 2020 at St. Joseph Catholic Church. At Dick’s request, charitable contributions may be made in his name to Saint Joseph’s Parish School in Fort Collins.

The family of Richard "Dick" Lee Flot created this Life Tributes page to make it easy to share your memories.