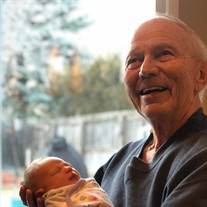 Richard Gossard, age 76, passed away at Anschutz Medical Campus in Denver on Friday, April 5th, 2019 due to complications following cancer surgery. Rick, an only child, was born in Hagerstown, Maryland, to Viola Thompson. He was raised by his mother and maternal grandmother, Margaret Redmond. He is survived by his wife, Suzi of Fort Collins,CO; his sons, Brandon Gossard and fiancee Rachel of Westminster, CO; Justin and Katy Gossard of Fort Collins; and his daughter, Shannon Gossard of Bellvue, CO. He is also survived by his beloved newborn granddaughter, Rowyn Grace, of Fort Collins, CO, and a cousin, Patty Griffin of Warren, OH. He graduated from South Hagerstown High School in 1961 and enjoyed returning for HS reunions and visiting with his former schoolmates, reminiscing about all the shenanigans of their youth. He started working at Mack Truck and joined the US Army Reserves where he was a member of B Company, 11th Special Forces Group, Airborne. After working for Mack Trucks on the assembly line for several years, he decided he needed a college degree to pursue a different path. He received both his undergraduate (Economics) and graduate degrees (MBA in Finance) from the University of Maryland, College Park. His first job, post-graduation was with Conoco Chemicals in petrochemical sales. In 1984, he accepted a position with Filtrol Catalysts and continued in this career following acquisitions by Akzo Nobel and Albemarle, serving as Senior Corporate Account Manager until his retirement in 2010. He was well respected in his field and forged many lasting friendships with colleagues and customers alike. Being bored after six weeks of retirement, he went back into business with a former colleague. When the friend decided to sell the business, Rick finally retired for good in 2017. He obviously enjoyed what he did! However, family was the most important thing to Rick. In 1976, he met Suzi in his hometown of Hagerstown where she had come to teach. They married on August 22nd,1981, in Pittsburgh, Pennsylvania and started their life together in Hagerstown. After skiing several times in Aspen, they had a dream to move to Colorado and moved to Georgetown in 1983. Their three beautiful children, Brandon, Justin, and Shannon were born while they lived in Georgetown and he taught them to love the mountains as much as he did. The family moved to Fort Collins in 2000. Everything that Rick did was done with his family in mind and as he mentioned very often, he was a “proud papa.” Rick loved the mountains in every season and frequently went hiking, skiing, camping, or just watching moving water--always with a bottle of wine. He and Suzi also loved traveling both domestically in their RV and internationally. One of his favorite trips was a cruise to Antarctica with Suzi and her parents where all enjoyed the majestic scenery and unique wildlife. Summer weekends were often spent at their mountain RV retreat at 7-Pines near Drake, CO, where he shared many a happy hour with cherished friends. He was never one for only small talk, but was always ready for a meaningful conversation, a debate about politics and current events, or an evening by the fire with a good book. His faith was important to him and he was a member of Redeemer Lutheran Church. With interest in friends and traveling, Rick was also a member of Friendship Force of Northern Colorado. When asked what phrases reminded his family of Rick they said: “to enjoy nature and cherish the moments that you can spend with your loved ones;” “work hard and play hard, but love even harder;” and “all is centered around cherishing those close to you.” Family, friends, and others whose lives Rick touched are invited to attend his memorial service on Friday, April 26th, at Redeemer Lutheran Church, 7755 Greenstone Trail, Fort Collins, 80525 at 11:00 am with a reception to follow at the Gossard residence to reminisce, grieve and support each other, and of course, drink a glass of Riesling in his honor. In lieu of flowers please consider a donation to the Fort Collins Salvation Army, one of Rick’s favorite charities.

Richard Gossard, age 76, passed away at Anschutz Medical Campus in Denver on Friday, April 5th, 2019 due to complications following cancer surgery. Rick, an only child, was born in Hagerstown, Maryland, to Viola Thompson. He was raised by his... View Obituary & Service Information

The family of Richard Lee Gossard created this Life Tributes page to make it easy to share your memories.