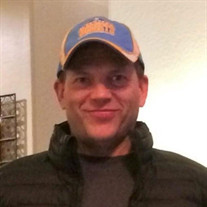 Richard Joseph Reese aka “Rippin Rick” age 54, died on October 24th, 2020 in Fort Collins, CO. Richard was born in Lincoln, NE September 8, 1966 to Edith I. “Edie” (Polak) Reese and Richard I. Reese of Wahoo, NE. He was raised in Fort Collins, CO from the age of four where he remained a resident until the time of his death. Richard (Rick) was preceded in death by his Mother, Edie Reese, 2012 and Father, Richard I. Reese, 1968. He is survived by his daughter Alexis Rose Reese, sister Lisa Dionne Reese, nephew Willow Castor-Reese, longtime partner Tara Beals and their two fur babies Zoro and Bruno. Rick had a passion for life and the sports of Footbag, Foosball, Disc golf, pool and skiing. His natural abilities and the love of sport led him to become one of the early legends in Footbag. Below is a contribution from Rick’s dear friend, partner and fellow Footbag legend Ken Shults of Portland, Oregon. “Rick went to a Footbag (aka Hacky Sack) tournament at City Park in his hometown of Fort Collins in the summer of 1985 and quickly developed a passion for the growing sport. He was a natural athlete and rose rapidly to the top of the sport and won his first of many world championship titles just two years later. His strength and speed earned him the nickname “Rippin”. He set the standard for excellence in freestyle footbag and invented many of the sports most iconic tricks including “Ripwalk” and “Ripstein”. His talent and athleticism inspired the players of his generation to work as hard as they could just to keep up. The legend of “Rippin” lives on in highlight videos that continue to inspire today’s players. But as great as he was as a player, his greatest gift to the sport of Footbag was his positive energy and enthusiasm for helping other players to improve. He was truly a superstar at every tournament he attended but he always enjoyed sharing tips with new players. After his playing career was over, his passion for the sport he helped create never faded. He donated to tournaments every year, often sponsored young players and attended many tournaments to show his support. In 2003, he travelled to the first world championships overseas in Prague, Czech Republic where he was honored with induction in the Footbag Hall of Fame. His record includes more world championships in team freestyle than any player in history. His mark on the sport cannot be measured in tournament wins, but can be seen in the players around the world that strive to be like ‘Rippin.’” In addition to his contribution to the sport of Footbag, he won many tournaments in Foosball as well. He had many lifelong friends in all of the sports that he competed in at home and around the world. He was also a diehard Colorado sports fan, Nuggets, Rockies and Broncos. To those who’ve had the good fortune to cross paths with Rick, whether it was for a brief conversation or life long friendship, he had the capacity and rare gift to brighten and inspire your day. He was known for his relentless encouragement, infectious smile, generous and open heart. He was known for his boundless energy and commitment to others, both personally and professionally. He would give you the shirt off of his back and literally has. He possessed a forgiving and loving heart, a beautiful heart of gold who will be dearly missed. Rick was also known as a loving, generous and dedicated Father. In lieu of flowers, the family is requesting donations to the GoFundMe set up for his 19yr old daughter Alexis Rose Reese. https://www.gofundme.com/f/b6dsza-rick-reese-memorial-fund?utm_medium=email&utm_source=customer&utm_campaign=p_email%2B5806-thank-you-ask-share There will be a celebration of life, Sunday, November 15th, 2020. 1pm-4pm, Windsong Event Center, 2901 Saddle Blvd, Severance, CO 80524. Dear friends of Rick, After much consideration, Rick’s family, including his daughter, sister, nephew and cousins will be holding a separate memorial celebration. We welcome you to join us where we can share stories, memories, celebrate his life and grieve his death. Join us on November 15th from 4-8pm 116 E Drake St Fort Collins, CO 80525 (Corner of Drake and Harvard - Parking on Harvard St) We will have live music by Lexi Reese, food and beverages. We look forward to seeing you there! with love and gratitude, Rick’s family Due to the current situation, we will have limited capacity at this location. Also, we ask that if you consider yourself to be in a “high-risk” group or experiencing any cold or flu-like symptoms, please stay home, thank you. Please RSVP to Lisa Dionne Reese via text 970-221-2622 or email to [email protected] Feel free to contact her if you have questions or need further information.

The family of Richard Joseph Reese created this Life Tributes page to make it easy to share your memories.