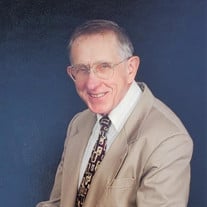 Richard Valentine Sherman “Rich”, age 87, of Fort Collins, died from a stroke on Thursday, August 13th, 2020 at Anschutz Medical Center in Aurora, Co. Richard was born in Chicago to Val and Dorothy Sherman where he attended Catholic School in his southside neighborhood. During high school, his family moved to Villa Park where he commuted to Marmion Military Academy. After high school he entered the United States Army and served two years, working as a cook in Austria and Germany. This experience was something he often talked about as he was proud that he served and it was a unique experience – the people he met, following orders, going to foreign countries and cooking? These were all new experiences for Rich. As an adult, he attended St. Mary’s College in Winona, Minn., where he earned a bachelor’s degree in business. He loved his college experience and often reminisced about those days. After the Army, Rich worked for the Federal Reserve Bank for four years. He and his family (mother, father and his siblings) lived in Chicago where his father had a show on CBS radio. The family then moved to Denver, Co. Rich would spend the rest of his life in Colorado. There he worked for Silver State and Midland Federal Savings. It was in June 1966 that he met and 9 months later married Allison Sherman, whom he had met in Biblical school. They had three children. Being a father and working for various savings and loans, real estate, and insurance companies kept him busy for many years, while Allison taught violin from their home. He and Allison were married 53 years. Rich was a devout Catholic. He and his wife were among founding members of St. Elizabeth Ann Seton Parish. He was an active member of the Knights of Columbus and the RCIA and taught the Good Shepard Program. His strong beliefs in God and the Catholic faith were obvious in his everyday actions. He was humble and thoughtful and always helped others. He loved to talk to people at length about almost any topic including nature, history, humanity, gardening, and politics. He was always reading and studying, and spent many hours later in life trying his hand at painting and pen and ink drawing. An avid gardener, you could often find Rich in his garden, pulling weeds, setting up a drip system, watering or planting, up until just days before his death. Rich was a person who didn’t know the meaning of being bored. He believed in hard work, but also spent plenty of hours in conversation or pursuing topics of interest – from natural history, science, gardening, art and religion. He cared deeply for others and would show it through his actions and words. He was not afraid to express his opinion, and if you ever needed advice, he’d be happy to give it. As a father and a husband, Rich was loving, supportive, patient, and kind. His grandson said it well, “I’ve never met anyone like grandpa.” Rich is survived by his wife, Allison Sherman; son William Sherman and his wife, Julie of Fort Collins; daughter Deborah Rojas and her husband, Ed, and their two children, Adam and Zach Rojas, of Johnstown, CO.; daughter Diana Sherman (Genoway), her husband Robert and their son Liam of Santa Fe, NM; brother Mike Sherman and his wife Lori, of Tucson, Ariz.; brother Mitch Sherman and his wife Jan of Denver, Co.; as well as many relatives and friends. He was preceded in death by his parents, Dorothy and Val Sherman of Denver, Co.; brother William Sherman of Chicago who died from polio at age 8; sisters Joan Daniel and her husband Marv of Denver, Co., and Mary Ellen Johnson and husband Spud of Denver, Co. A Rosary is being held at St. Elizabeth Ann Seton Parish church in Fort Collins at 7 p.m. on Wednesday, August 19. A Mass of Christian Burial will be held at the church at 10 a.m. on Thursday, August 20th, followed by burial at the Hillside Cemetery in Fort Lupton at 2 p.m. Due to Covid 19 the seating is limited in the church and masks are required. The Mass will also be streamed live online here: https://www.facebook.com/pages/category/Religious-Organization/St-Elizabeth-Ann-Seton-Catholic-Parish-in-Fort-Collins-CO-613861565303368/ Jesus said, “I am the good shepherd. The good shepherd lays down his life for the sheep.” John 10:11

The family of Richard V. Sherman created this Life Tributes page to make it easy to share your memories.