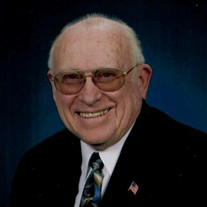 Richard George Wilson of Fort Collins, Colorado, age 87 died on January 1, 2017. He was born on December 24, 1929 in Denver, Colorado. He graduated from the Denver Public School System (South High) and attended Chicago Technical College, studying Architecture. He served 2 years in the Army Infantry, 3rd Division, 15th Regiment and served in Korea during that conflict. He is survived by his wife, Frances Wilson; son, Kirk (Debbie) Wilson; son, Martin Wilson; daughter, Kathi Wilson, all of Fort Collins, Colorado; daughter, Dawn (Glenn) Coleman of Loveland, Colorado. There are nine grandchildren and eight great-grandchildren. During his lifetime, he was active in the community he lived in. He was a past Commander of the Mile High Jeep Club in Denver; past member of East Denver Lodge #160 Masonic Lodge for 25 years; past member of the Knights Commandry Temple in Denver for 25 years and past member of El Jebel Shriners Jeep Patrol in Denver. He was a Scout Master for Troop #326 in Omaha, Nebraska, where he helped 8 scouts achieve the Eagle Scout Badge. He worked as a Quality Control Technician and Industrial Engineer for the Dr Pepper Company of Dallas Texas for 25 years; working in Minneapolis, Minnesota, Omaha, Nebraska, Dallas, Texas and Fort Collins. He was a member and past Deacon of Faith Evangelical Free Church where he oversaw the Usher Ministry. He had many hobbies and interests. He was a model railroad enthusiast and was a member of the Northern Colorado Railroad Club, National Model Railroad Association and various railroad operating groups. He was a big game hunter, fisherman and he enjoyed camping with the RV trailer. He was also the past President of the Northbrook Home Owner’s Association. He was preceded in death by his grandparents, Marie and John Hoeber and his parents, Clara and Harry Wilson. A Memorial Service is scheduled for 1:30 PM, Thursday, January 19th at Faith Evangelical Church, Fort Collins. In lieu of flowers, memorial contributions can be made to Faith Evangelical Free Church and to The Larimer County Humane Society.

The family of Richard George Wilson created this Life Tributes page to make it easy to share your memories.