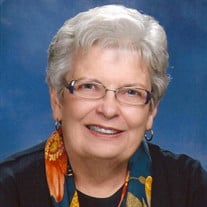 "What a revoltin' development this is!"—Rita would often declare, quoting her favorite radio character, Chester A. Riley. Truer words could not express our sadness at her passing on September 26, 2020. She would console us with the reminder that she has joined her Savior in Heaven, along with her beloved husband, Jim, who paved her path to salvation in 2002. A memorial service for friends and family will take place at a later date when we can give Rita the joyous celebration of life she deserves and would want. LaRita Ann Bennett was born to parents Merle and Carl Johnson in Osceola, NE, on February 1, 1938. She grew up on the family farm near Swede Home, living the life of Riley until sister Linda the Pest arrived five years later. At age six she met Jimmie, who had a toy desk at his house. Rita insisted they play office, and that she would be the boss. Little did she know at the time that she had just met the everlasting love of her life. While attending Stromsburg High School, she and Jim began their life-long romance. After high school, she attended Luther College in Wahoo, followed by several years of teaching in Nebraska and Colorado. Rita and Jim married July 12, 1958, a union which produced children Jeff (Lynn) and JoAnn (Tom), along with decades of marital bliss. Rita gave her entire life to ensure the happiness of her family, a mission at which she succeeded beyond all expectations. As a life-long proud parent, Rita often marveled aloud at all her children achieved. She prodded, encouraged, and financed an infinite number of school, science fair, and 4-H projects, including a detailed model of a human cell by Jeff and dozens of blue-ribbon projects crafted by JoAnn. Rita’s strong Swedish upbringing shone most brightly at Christmas, when she faithfully carried on the Viking tradition of preparing and coaxing guests to consume the labor-intensive and celebratory feast of lutfisk, white sauce, and lingonberries with ostkaka, known to most Americans as the cake of disappointment. The consummate host, Rita always went out of her way to invite and include her entire family as well as many friends to every gathering, large or small. Many of Jeff’s grateful college friends received invitations to Rita’s home-cooked meals. While she stood in awe at the amounts consumed at these sessions, she never let anyone leave hungry. Rita’s life of deep faith, strong beliefs, and hard work served as an example and inspiration. She and Jim volunteered on many church committees: Trinity Lutheran Church in Fort Collins, Our Savior’s Lutheran Church in Denver, and Spirit of Joy Lutheran Church in Fort Collins, where Rita also comforted many care receivers as a Stephen Minister. She treasured her membership in the Fort Collins Service League, dedicating time to many Kitchen Kaper Home Tours. Rita nurtured her love of gardening as a member of the Fort Collins Garden Club. She became a Master Gardener through CSU’s extension program, an achievement that produced many seasons of prize-worthy yards and gardens, including an appearance on the Fort Collins Garden Tour. In addition to her successes at home and garden, Rita also worked in retail, financing a family vacation to Disney World in 1982 as a hard-working shoe saleswoman at May D&F. In 1993, Rita and Jim formed J&R Ventures and purchased Photo55, later named PhotoImage Center, where Rita worked as manager, counter salesperson, display technician, and calendar assembler. She sold the business in 2005. Rita thrived as an organizer, teaming up for several years with Less-of-a Pest Linda to plan the Younglund Cousins Reunion, the talent portion of which allowed Rita to showcase a comedic streak inherited from her parents, as well as her agility and slapstick timing, as the roller-skating recipient of a pie in the face. Linda’s greatest memory will always be the day Rita stopped thinking of her as a pest of a little sister, and the two became friends. As travel companions, Linda drove while Rita navigated. They helped organize each other’s closets and kitchens over the course of several household relocations, some of which began with Rita exclaiming, “Oh, Linda—you haven’t even started packing!” That sentiment also applied to JoAnn on many moving occasions. In retirement, Rita shared her love of reading with young students at nearby Traut Elementary. She enjoyed theatre, live music, game nights, birthday celebrations, and meals with friends. In addition to her children and their spouses, those grateful for having shared Rita’s life, Swedish glögg, and sense of humor include her pie-throwing sister, Linda Carlson; brother-in law, Roger Bennett; nieces Kris Bennett and Kendra (Barry) Kelly; grand-niece Kaitlyn Bennett; grand-nephews Sam and Jack Kelly; too many cousins to name; and last but not least: best cat ever, Andy. Our entire family extends warmest thanks to Rita’s many considerate caregivers at Poudre Valley Hospital; Morningstar Assisted Living; Halcyon, Pathways, and Suncrest Hospices; InnovAge of Loveland, and especially Brookdale Assisted Living, where Rita lived out her days as if seated on velvet cushions. She received the same kind of compassionate attention from those angels that she provided for her own family. She loved all of her caregivers, and we know they loved her. “Rita’s place in my heart is forever surrounded by the gardens she loved,” says Rita’s daughter in-law, Lynn. With that memory in mind—and should friends desire—contributions in Rita’s name may be sent to Friends of The Gardens on Spring Creek, 2145 Centre Avenue, Fort Collins, 80526.

"What a revoltin' development this is!"&#8212;Rita would often declare, quoting her favorite radio character, Chester A. Riley. Truer words could not express our sadness at her passing on September 26, 2020. She would console us with the reminder... View Obituary & Service Information

The family of Rita Bennett created this Life Tributes page to make it easy to share your memories.

&quot;What a revoltin&#39; development this is!&quot;—Rita would often declare,...