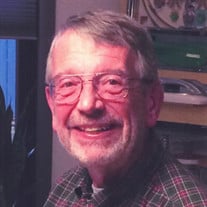 Robert E. (Gene) Risley, 72, of Fort Collins, died November 13, 2019. Gene was born in Decatur, IL the son of Paul E. Risley and F. Eloise Risley, both deceased. He graduated from Booneville High School in Booneville, MS, class of 1965; and from Southeast Missouri State University in Cape Girardeau, MO, class of 1969 with a B.S. in Education. Gene served in the Army Reserve from 1969 to 1975 and was Honorably Discharged with a rank of Sgt. He retired from Procter and Gamble in 2001 after 24 years of service. Gene married Melissa A. Critchfield on July 31, 2004 in Homewood, IL. Gene is survived by his wife, Melissa and three children (from a previous marriage to Jolene Gaines in 1967), Joseph P. Risley, of Milan, TN; Michael E. Risley, of Salt Lake City, UT; and David P. Risley, of Washington DC. He is also survived by seven grandchildren, Kendra, Christopher, Katharine, Davin, Liam, Everest, and Eden. A private service will be held at a later date.

The family of Robert "Gene" Risley created this Life Tributes page to make it easy to share your memories.