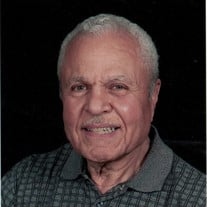 Robert Jay Plick passed away in Fort Collins, Colorado on August 15, 2020 at the age of 88. Robert was born on February 26, 1932 in New Orleans, LA, the fourth of five children of Leon and Anna Plick. His siblings include Lessamina Plick, Eloise Tenette, Willianna Wilson, and Calvin Plick. Eloise Tenette is the only sibling who survives him. He is also survived by his wife, Linda Plick, son, Robert Plick and daughter, Jennifer Mathis and grandchildren, nieces, and nephews. He was preceded in death by his son, Frank Plick. Since his father died when Robert was young he felt compelled to start working at an early age shining shoes and selling newspapers on the trolley to help support his family. At the age of sixteen he joined the Army and completed a thirty-year career there, including tours in Korea and Vietnam. He was so successful that he was a Master Sergeant by the age of twenty. When the rank of E-9 was later added, he was quickly promoted to Command Sergeant Major. One of the proudest moments of his Army career was the opportunity to participate in the integration of the troops. His was one of the units that actually exchanged African American men with Caucasian men and vice versa. While in the Army, Robert served in Fort Lewis, WA, Korea, Germany, Vietnam, and Fort Carson, CO. Among the many medals awarded to him are the Legion of Merit and the Bronze Star. His last assignment was the best according to him. He was chosen by Department of the Army to join a group of all ranks who traveled worldwide to assess the jobs women were doing and recommend other specialties that should be opened to them. It was the highlight of Robert’s career to participate in another integration moment, this time being the WACs becoming part of the Regular Army. After retirement from the Army, Robert stepped into a new adventure, that of mentor to a young man who, just like him, wanted to join the Army. This young man who lived next door was determined to serve. He would come over and check out Robert’s uniforms and medals and to listen to his stories of Army life. Many times he brought his friends with him. He did go into the Army and Robert was present for him at all graduations, promotions, and changes of command to offer advice and be supportive. This young man is Lieutenant Colonel Chip Potter, who is now retired after a very successful career. Robert was a member of St. Francis Xavier Church in Missoula, MT. He volunteered along with this wife at the Missoula Public Library, and many charitable events. He enjoyed bowling, pinochle, fishing, boating and camping. He lived at Brookdale Memory Care, where he received the best of treatment from the professional and caring staff, whom he loved. A committal service will take place with full military honors at Arlington National Cemetery in Arlington, Virginia on March 30, 2022. Please call Goes Funeral Care at 970-482-2221 for more information on how to attend.

Robert Jay Plick passed away in Fort Collins, Colorado on August 15, 2020 at the age of 88. Robert was born on February 26, 1932 in New Orleans, LA, the fourth of five children of Leon and Anna Plick. His siblings include Lessamina Plick,... View Obituary & Service Information

The family of Robert Jay Plick created this Life Tributes page to make it easy to share your memories.