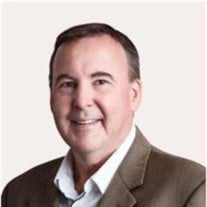 It is with deep sorrow and sadness that we announce the passing of Robert (Bob) Alan Reed on February 23 at the age of 59 at his home in Loveland, Colorado. Bob was always full of life and had a big heart for his family, his church, his work and the outdoors-all done with God’s joy. His life was cut all too short after a two-year fight with lymphoma and he will be greatly missed by all who knew and loved him. Bob was born on April 18, 1960 in Trenton, NJ as the fourth child of Donald and Elva Reed (both deceased), grew up on the mission field in Beirut Lebanon, went to grade school in Athens, OH and attended Jr. High and High School in Quincy, MA. He went on to attend Eastern Nazarene College (Quincy, MA) where he majored in Chemistry and did his graduate work at the University of North Carolina (Chapel Hill) where he received his Ph.D. in Analytical chemistry in 1987. He excelled in all that he did throughout his life-in academics, sports, music, and brought out the best in those around him. Bob was an innovative leader throughout his career in the pharmaceutical industry with over 60 publications and five patents. After an NIH postdoctoral fellowship at Princeton University, he joined Merck & Company in the Philadelphia area of PA, where he lived most of his life and rose to be the Senior Director of analytical chemistry. After senior-level positions at Xenoport, Celsion and Aradigm, he ended his career as the Chief Technical Officer and senior vice president at Reata Pharmaceuticals (TX) where he managed their innovative drug research and supply development. He was recognized as an American Association of Pharmaceutical Scientists Fellow by his peers for many contributions to the pharmaceutical field. He is survived by his beloved wife Deborah (Mountz) Reed, his brother Donald Reed and his family (wife Martha, and daughters Kathleen, Jeanette and Rebecca), his brother Lawrence Reed and family (wife Nancy, and sons Lawrence and Michael), his sister Alice Reed and family (husband Al, daughters Rachel and Christen and son Christopher) and Elva Hazelton and family (daughters Sondra, Cindi and Amanda), his sister-in-law Vicki (Mountz) Brenneman and family (husband Brian, daughter Rachel and sons Daniel and Nathan) and brother-in-law Ross Mountz and family ( sons Weston and Christian). A service to celebrate and honor his life will be held on April 18, 2020 at the Immanuel Church of Nazarene (1260 Welsh Road, Lansdale PA, 19446) at 1:00 pm. The family requests no flowers but donations made out to the Immanuel Church, Attention “Kenya’s Kids” and sent to the Immanuel Church of Nazarene would Honor Bob’s lifelong commitment to missions.

It is with deep sorrow and sadness that we announce the passing of Robert (Bob) Alan Reed on February 23 at the age of 59 at his home in Loveland, Colorado. Bob was always full of life and had a big heart for his family, his church, his work... View Obituary & Service Information

The family of Robert A. Reed created this Life Tributes page to make it easy to share your memories.

It is with deep sorrow and sadness that we announce the passing...