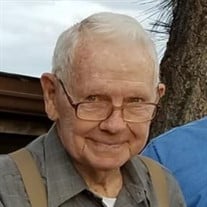 Robert Sheppard Springer, 91, resident of Fort Collins, Colorado, former resident of Appleton City, Missouri, passed away February 18th. Shep was born June 16th, 1929 to Ruth & Rollo Springer of Bourbon, Missouri. Shep graduated from Fort Collins High School in 1947. He was united in marriage to Mary Ann Kidd, of Fort Collins, Colorado on March 28th, 1948. In the spring of 2019, they were overjoyed to celebrate their 71st wedding anniversary with family and old friends! Mary predeceased Shep on August 27, 2019. They were the proud parents of five children: Pamela (Arthur) Butterfield of Colorado Springs, Colorado; Paula (James) Brant of Littleton, Colorado; Penny (Patrick) Walker of Morrison, Colorado; Patrick (Patricia) Springer of Thompson’s Station, Tennessee; Perry (Barbara) Springer of Fort Collins, Colorado; with 17 grandchildren and 21 great-grandchildren. Shep had many interests from raising orchids, homing pigeons & farming. He owned the Fort Morgan Locker Plant and Slaughter House. He was an educator of Industrial Cooperative Education at Poudre HS, FCHS & Larimer County VoTech. Shep enjoyed frequenting the Sale Barn at Centennial Livestock Auctions in Fort Collins. He was a friend to everyone he met. He committed many years of dedicated service to the Larimer County Fair & Rodeo Board. Over the years, Mary and Shep found great joy in raising Dexter cattle and Newfoundland dogs, bringing much happiness to their lives. While raising cattle in Fort Collins, CO, Shep hauled the brew mash from Odell’s Brewery until they moved to Missouri. Shep & Mary happily spent 25 years of retirement at the end of a dirt road in the “middle of no-where” Missouri (near Appleton City, MO). While in Missouri, Shep was cattleman of the year for the Bates County Cattleman Association. Robert Sheppard Springer was laid to rest next to his wife Mary Ann Springer at Kidd’s Chapel Cemetery, Lowry City, Missouri on February 23,2021 in a private family memorial service. This chapel was built on land donated by Mary’s grandfather and the stone for the chapel was donated by him. We were happy to honor his wishes and laid him to rest at Kidd’s Chapel. Memorial donations may be made to Pathways Hospice of Larimer County at 305 Carpenter Rd., Fort Collins, Colorado 80525 or Kidd’s Chapel Cemetery, sending check to Sue Wilkins at 545 SE 1100 Rd. Deepwater, MO 64740.

The family of Robert "Shep" Springer created this Life Tributes page to make it easy to share your memories.