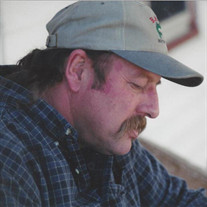 Robert John Trossen left his loved ones on Wednesday, April 24th at Poudre Valley Hospital. He was born July 10, 1954, in Racine, Wisconsin, the youngest child of Leonard and Arlyce Trossen. In 1955 the Trossen family moved to Minocqua, Wisconsin where Rob grew up loving the Northwoods, the lakes and helping out (and sometimes misbehaving!) at his grandparents, Joe and Katie’s, iconic local landmark, Joe's Trading Post. He attended Minocqua Grade School through the 8th grade when his family moved to Greeley, CO. Rob's greatest gift was in woodworking. He worked with his father, Len in construction and later worked for several years with his great friend, Randy at Baird Builders, in building, remodeling and finish work. He finished his career doing what he loved at Mountain 'N Plains in Fort Collins. Growing up in Northern Wisconsin instilled in him a lifelong love of all things outdoors: hunting, shooting sports and fishing. But the catch of his life, was his wife, Shelley. They were together 26 years, all through which both of them loved, raised and spoiled many furry 4-legged children. Robert was preceded in death by his parents, and older brother, Len, Jr. He is survived by his wife Shelley; sisters Karen (Milt) Klingenberg, Terry (Lew) Moran; and nieces, Kelsey (Adam) and Erin (Joe); nephew, Evan (Kaleigh) and a new little grand-niece and nephew. Rob's memory will live on forever in the beautiful creations he's left in each of our homes…and in the hearts of his family and friends. A private family gathering will be held soon, and a public celebration of his life is planned for later. Contributions may be made in Rob's honor to the American Cancer Society or Larimer Humane Society.

Robert John Trossen left his loved ones on Wednesday, April 24th at Poudre Valley Hospital. He was born July 10, 1954, in Racine, Wisconsin, the youngest child of Leonard and Arlyce Trossen. In 1955 the Trossen family moved to Minocqua, Wisconsin... View Obituary & Service Information

The family of Robert John Trossen created this Life Tributes page to make it easy to share your memories.