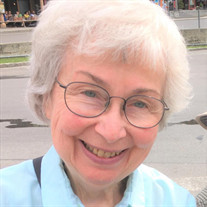 Roberta “Bobbie” R. Mielke, a resident of Fort Collins, CO since 1963, passed away at Poudre Valley Hospital on February 18, 2022 at age 84. Bobbie was born in Minneapolis, MN on January 9, 1938. At age four, she started playing piano and became exceptionally talented in both classical and jazz music. She received a B.S. in Mathematics, a B.A. in Math Education, and a Master’s degree in Mathematics from the University of Minnesota. She met her husband, Paul Mielke, in a university math class, and they were married on June 25, 1960. Bobbie taught math at Macalester College in MN for two years. Paul’s career as a statistics professor brought them to Fort Collins in 1963, where they stayed and raised their family. From the early 1970’s, Bobbie studied piano under the late Wendel Diebel, and she prepared and performed countless solo recitals for family and friends. She inspired all three of her children to play instruments, and she supported them as their piano accompanist. This passion led Bobbie to her career as a staff accompanist at Colorado State University, where she played recitals with hundreds of students and faculty. She also was a pianist with the Fort Collins Symphony Orchestra for many years, and even soloed with them a couple of times. Bobbie served on boards for various music organizations in the community, and she also volunteered thousands of hours in the surgery waiting room at Poudre Valley Hospital. Bobbie and Paul shared a love for international travel. They explored most of Europe, but their favorite destination was Switzerland, which ultimately became an annual summer vacation. They frequently were joined by family or friends. During these trips to Switzerland, a few nights were always spent at the Hotel Rosenlaui. Other favorite activities included time with family, baking bread, gardening, crochet, sewing, sudoku, crossword puzzles, and playing bridge. Bobbie is survived by her children William (Lisa) Mielke of Plymouth, MN, Emily (Stanten) Spear of Arden Hills, MN, Lynn (Nicholas) Basila of Nashua, NH; grandchildren John (Han), Brian, and Alexander Spear, Kayla Marie and Rayna Mielke, Elena Basila; great-grandchild Paul Spear; sister Ronnie Laitinen of St. Louis Park, MN; and her beloved cat Clara. Bobbie was preceded in death by her parents, Roy and Janet (Roehl) Robison, and her husband of almost 59 years, Paul W. Mielke, Jr. A private family service will be held at a later date. In lieu of flowers, please consider donating in Bobbie’s name to one of the following organizations: Front Range Chamber Players https://www.frontrangechamberplayers.org/donate.html or https://www.coloradogives.org/FrontRangeChamberPlayers/overview?step=step1 International Keyboard Odyssiad® & Festival, U.S.A. (IKOF) IKOF, P.O. Box 1964, Fort Collins, CO 80521 or IKOF, 6732 Clovis Court, Timnath, CO 80547

The family of Roberta Mielke created this Life Tributes page to make it easy to share your memories.