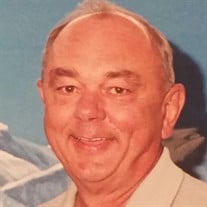 Ronald J. Harding, Sr., age 76 of Fort Collins, CO, died October 2, 2018 at his home surrounded by his loving family. A memorial mass will be celebrated at 9:30 AM Monday, October 8, 2018 at St. Joseph Catholic Church, 200 West Mountain Ave., Fort Collins, CO. Military honors will conclude the mass followed by a reception in Meredith Hall. Ronald Joseph Harding was born and raised in Kaska, PA to John and Sophie Harding. He enlisted into the U. S. Army in 1960 and was honorably discharged in 1963. After his discharge from the Army, he moved to NJ for a job where he met and married Sandra Pape. Together they have three children, Jodi, Ron Jr. and James. He worked as a carpenter throughout his career renovating and remodeling residential properties in Watchung, NJ. During that time, Ron volunteered as a Firefighter for the Watchung Volunteer Fire Dept where he earned a lifetime membership in their association. Ron was an avid deer and turkey hunter who enjoyed watching Colorado Rockies baseball and golf. When Ron retired, he and Sandi settled in Myerstown, PA for about 15 years prior to moving to Fort Collins, CO in 2012. Ron got involved with St. Joseph Parish in Fort Collins, CO as an usher and with the Knights of Columbus. He is survived by his wife, Sandi; son Ron Jr. and his wife Sylvia and their three children, Kayla, Sophia and Ronnie III, all of Fort Collins, CO; daughter Jodi Brogan and her four children Patrick, Alex, Meghan and Christopher of Lancaster, PA; son James Harding; and one sister Isabelle Harding of Philadelphia, PA. He is preceded in death by his four brothers, Mickey, Johnny, Freddie and Eddie. Ron’s family requests that any memorial donations please be made to St. Jude Children’s Research Hospital or to Children’s Hospital Colorado in care of Goes Funeral Care, 3665 Canal Dr., Ste. E, Fort Collins, CO 80524.

The family of Ronald Joseph Harding created this Life Tributes page to make it easy to share your memories.