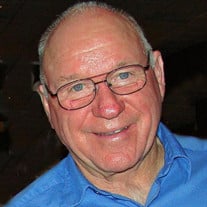 On May 2nd 2020 Ronald G. St.Germain laid down his tennis racket after his final match and climbed the stairs to heaven to join his parents. Ronald was born March 18th 1940 in Plattsburgh NY to David and Albina (Archambault) St.Germain. He was the youngest of three siblings and appropriately spoiled. He served in the Army for two years in Germany. Ron married Donna DiFulvio on February 2nd 1963. They had two children, Keela and David. Ron worked as a fireman before becoming a Correction Officer. He retired as a lieutenant and that’s when the fun began! Of all things, he bought a “weenie wagon” and sold hot dogs on a street corner. What a change this was from being a correction officer! He had fun doing this and had worked up quite a clientele. In addition to this, he began selling sheds made by the Amish. He enjoyed both of these “post-retirement” jobs . At this time he was married to his second wife, Joanne Hadfield. Tiring of the cold winters in Upstate New York, he became a snowbird, traveling south each year to his home in Maple Leaf Estates in Port Charlotte, Florida. Maple Leaf Estates is said to be the fountain of youth for many people and Ron was no exception. Here he made many friends and became an avid tennis player. He practiced hard and his team won several tournaments. He also learned bird carving, eventually becoming so successful that he taught classes in it. In between playing tennis and bird carving, he learned ballroom dancing, pen and ink sketching and wood working to name a few hobbies. He also enjoyed bicycling, kayaking, fishing and playing golf. As you can see, he did not let the dust settle under his feet! He was a funny guy, always joking around and playing pranks. He made us laugh a lot! Ron developed lung cancer in 2016 and fought this for four years. He never lost hope and he never focused on the limitations the cancer caused him. He continued to play tennis until a few months before his death. Ron was preceded in death by his father, David and mother, Albina He is survived by his daughter Keela (St.Germain)Beavers, son in law Robert Beavers, son, David St.Germain , daughter in law Erin St.Germain, granddaughters Emily and Caitlin St. Germain, sister Charlene Lombard, brother Carlton St.Germain as well as many nieces, nephews, cousins and very good friends, too numerous to list, but not forgotten. He will be missed by us all. A special thank you to Dr. James Moore of UCHealth Oncology in Ft. Collins, Colorado, his medical assistant Deanna and the great staff of Poudre Valley Hospital Outpatient Infusion. A celebration of life will be held at a later date in Florida and New York. In lieu of flowers, please very simply, enjoy your life, love one another and if you have the chance to laugh or make someone else laugh, by all means…do it!

On May 2nd 2020 Ronald G. St.Germain laid down his tennis racket after his final match and climbed the stairs to heaven to join his parents. Ronald was born March 18th 1940 in Plattsburgh NY to David and Albina (Archambault) St.Germain. He... View Obituary & Service Information

The family of Ronald G. St. Germain created this Life Tributes page to make it easy to share your memories.