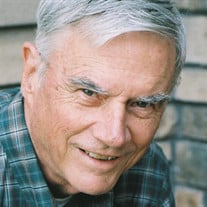 Roy L. Hemeyer, age 79 graduated this life and went to be with his Lord and Savior on Friday, July 22nd, 2016 at his Good Samaritan home in Loveland, Colorado after a hard fought battle with Parkinsons. He was born November 14th, 1936 during the Great Depression on the family farm called “Sunny Slope” south of Slater, Missouri to Charles Henry and Freda (Moeller) Hemeyer and was the youngest of three children. From his birth to his graduation last Friday, he poured his life into his faith in Jesus Christ, his family, and his quiet selfless love for others. Having much older siblings and growing up essentially an only child on a farm in rural Missouri at that time, Roy learned the value of imagination, diligence, perseverance, loyalty, honor, hard work, contentedness and common sense. From attending a one room school and being the only child in his grade, to graduating from Slater High School in 1956, he left the farm to pursue a Mechanical Engineering degree at the University of Missouri, all while serving in the Army Reserves until 1963. During his time in the Army Reserves, he spent time at Fort Carson, Colorado, when he drove up Pikes Peak one weekend and was hooked on the Rocky Mountains ever since. While serving as a busboy during college at the nearby Stephens College cafeteria, Roy met and fell in love with one of the waitresses, the love of his life – Kathryn Glarner from Raymondville, Texas. They were married on December 29th, 1960, and soon after graduation, they moved to Chicago to start careers and a family. After several years in Chicago, he took a job as a Mechanical Engineer designing power plants for Black & Veatch and moved to Raytown, Missouri and then to Stilwell, Kansas, where he retired after 34 years. When Roy wasn’t planning the next family camping trip to the Colorado Rockies, he could be found playing Santa Claus building toys in his wood working shop in the basement for his children and grandchildren. Following the family’s move to Stilwell, Kansas, he played a major role in the founding of Blue Valley Baptist Church, where he humbly and diligently devoted his time to lead others to the saving grace of our Lord Jesus Christ. After retirement, Roy and Katy moved to Colorado to be near family and also their cabin in Breckenridge – in God’s grandiose mountains that captured his love and inspiration so many years before. Left to honor Roy and remember his love and legacy are Roy’s wife – Katy Hemeyer; three children - Suzanne Dahlquist, Gary (Christina) Hemeyer, and Bryan (Chelle) Hemeyer; seven grandchildren – Riley Dahlquist, Luke Dahlquist, Kamran (Tate) Martin, Garrett Hemeyer, Juju Hemeyer, Cydney Hemeyer, and Blake Hemeyer; his brother Erdell (Betty) Hemeyer; and many nieces and nephews. Roy has gone on to meet his parents and his sister Goldie Edelblute in heaven. Roy will be remembered as a heavenly saint, a devoted husband, a loving father, a caring grandfather, a faithful friend, a gentle spirit, and a very good man with a wonderful witty sense of humor. A Memorial Service will be held on Friday, July 29th, 2016 at 2:00 pm in the Chapel at Good Samaritan Loveland Village, 2101 South Garfield Ave, Loveland, Colorado 80537, with the Rev. Doug Overall officiating. Pie will follow in the Chapel. Plans are being made to honor Roy’s life with a Memorial Service in Kansas City at a later date.

Roy L. Hemeyer, age 79 graduated this life and went to be with his Lord and Savior on Friday, July 22nd, 2016 at his Good Samaritan home in Loveland, Colorado after a hard fought battle with Parkinsons. He was born November 14th, 1936 during... View Obituary & Service Information

The family of Roy Lee Hemeyer created this Life Tributes page to make it easy to share your memories.

Roy L. Hemeyer, age 79 graduated this life and went to be with...