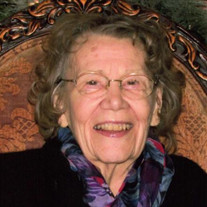 The family of Ruth Clarkson Bollinger invites you to a springtime Celebration of Life service for Ruth who died January 1, 2019. Ruth touched many hearts throughout her 91 years, 54 of which were in Fort Collins, Colorado. Growing up in Omaha, Nebraska with a father who sold furniture, a mother who spoke German, an Aunt living in the adjacent house and a sister 13 years her senior, Ruth recalled those times with a deep fondness. In addition while in college she fostered the first of her life-long friends and maintained these early relationships through written correspondence over 70 years. She also kept many of those same letters which have been passed onto her daughter! While never imagining this, Ruth became a Methodist Minister’s wife in 1956 marrying Rev. Homer Philon Bollinger and adopting his child, Mary Carol Bollinger. Together they created homes and served churches in Sidney, Nebraska, Colorado Springs, Wheat Ridge, and finally Fort Collins, Colorado in 1965. Ruth’s interest in helping people propelled her to earn a masters degree in Social Work at the University of Nebraska in 1952. She worked in Omaha for the County Assistance Bureau and later for St. Joseph's Hospital in a special unit for polio victims. She enjoyed being an Ombudsman and Adoption worker for Larimer County Human Services in Fort Collins. She liked caring for young children in her home, becoming a pseudo grandmother for one. She was a lifelong member of the American Association of University Women and other service organizations. Those who cared for her in her later years, describe how a perfectly timed touch of her hand or quiet question could alter the course of a day for another. Ruth was a complex woman, bright, culturally and politically aware, socially engaged. She was very smart, grounded in the real world and very intelligent about feelings. Ruth was a very good observer of others, with trenchant insight. Her cleverness came through in the ditties she wrote, endearing her to those on the receiving end of her cards. She loved her husband of almost 50 years, her daughter, close friends, family and staying connected with Mary’s first mother’s family. Join with family and friends at the Foothills Unitarian Church in Fort Collins, Friday, May 24th at 1:00 pm to celebrate and honor Ruth Bollinger’s life. In Lieu of flowers contributions may be made to Pathways of Northern Colorado, American Association of University Women, Planned Parenthood, The Gardens on Spring Creek or an organization of your choice. Send contributions to Goes Funeral Care at 3665 Canal Drive, Fort Collins, Co 80524.

The family of Ruth Clarkson Bollinger invites you to a springtime Celebration of Life service for Ruth who died January 1, 2019. Ruth touched many hearts throughout her 91 years, 54 of which were in Fort Collins, Colorado. Growing up in Omaha,... View Obituary & Service Information

The family of Ruth Clarkson Bollinger created this Life Tributes page to make it easy to share your memories.

The family of Ruth Clarkson Bollinger invites you to a springtime...