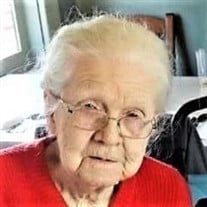 Sara Nelle Covington Young, 98, of Panama City Beach, Florida, passed away Sunday, June 7, 2020 at her daughter’s home in Loveland, Colorado. She was surrounded by her family and her constant companion dog Harley. Sara was born May 21, 1922 to John Dixon and Ethel Covington in Elba, Alabama. Her parents were school teachers. Called “Sister” by her three brothers (James, Robert, Fred) and “Sara Nelle” by her Southern parents, she was lovingly called “Nelle” by the young man, Lionel Young, from a neighboring Alabama town she eloped with at eighteen. They were married by Probate Judge Helen Warren in Chipley, Florida, in a marriage that lasted fifty-eight years, until Lionel’s death. In 1947, with their two young children (Lionel Jr. and Nancy), they moved to Panama City Beach, Florida, to build and operate the first garage/service station on Panama City Beach. They were among the first mom and pop businesses on the sparsely settled beach. They worked hard, having to make enough money in the short summer tourist season to support their now four children (Sara, Mary Frances) throughout the year. Sara became fondly named by employees as “Boss Lady.” She operated the cash register, kept the books, administrated the automotive parts department, and pumped gas when needed. Many male customers were amazed that this female “Parts Lady” could hand them the right spark plugs without even looking in the parts manual. In addition to working in the family business, Sara, an accomplished seamstress, sewed the girls’ clothes and served as a Brownie Scout Leader and an officer in the Beach Elementary PTA. She was an excellent Southern cook, specializing in fried cornbread, sour cream pound cake, fried chicken, and turnip greens. She instilled in all her children a love of reading, a love of history, a love of learning, and a love of family. She modeled a love of God and a belief in doing one’s best and in helping others. Not only did all four children pursue higher education, but Sara earned an Associates degree from Gulf Coast Community College in her forties. In retirement, Sara and Lionel, members of Good Sam, traveled through all 48 contiguous states. Sara also began designing and stitching quilts, making one for each great grandchild and donating over fifty to Project Linus. A member of the St. Andrews Bay chapter of the DAR, she was an avid genealogist and became quite proficient at computer research. She often was found reading or working with her flowers or feeding the birds. Sara was a member of St. Andrew’s Episcopal Church in Panama City and attended St. Paul’s Episcopal in Fort Collins when in Colorado. Her favorite scripture was Psalm 46 (“God is our refuge and strength, a very present help in trouble. . .”), and her favorite hymn was “Amazing Grace.” She leaves behind four children: Lionel, Jr. (Sheilia) of Mariana, Florida; Nancy Young of Loveland, Colorado; Sara Causey (Harvey) of Arlington, Georgia, and Mary Frances Riggs (David) of Pace, Florida; ten grandchildren, and twenty-one great grandchildren. Her great grandchildren never left a visit without her assurance of, “I love you a bushel and a peck and a hug around the neck.” Due to COVID-19 restrictions, plans for a Celebration of Life are not complete. An online service will be held by St. Paul’s in Fort Collins. Plans are also to have a service in Panama City at a later time. Sara will be buried in Evergreen Memorial Gardens in Panama City next to her beloved husband. In lieu of flowers, donations may be made in memory of Sara to Pathways Hospice in Fort Collins, who gave Sara such exceptional loving care in her last days, or to your favorite charity. Please check back on this page for service updates as they become available.

Sara Nelle Covington Young, 98, of Panama City Beach, Florida, passed away Sunday, June 7, 2020 at her daughter&#8217;s home in Loveland, Colorado. She was surrounded by her family and her constant companion dog Harley. Sara was born May 21,... View Obituary & Service Information

The family of Sara Nelle Covington Young created this Life Tributes page to make it easy to share your memories.