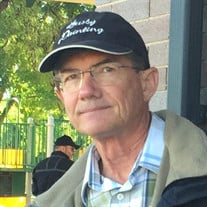 Scott Preston Busby was born in Pendleton, Oregon, Dec 23.1957 to Don and Sharon Busby. Scott moved around Montana most of his early years, living mostly in Billings. In 5th grade he moved to Salt Lake City where his Uncle Ron and Aunt Eva invited his family to live with them. It was a life-changing time attending Salt Lake Junior Academy, getting a Christian education. Scott's family moved to California during his senior year and he graduated from Orangewood Academy in 1976. After high school Scott moved to Moab, Utah and lived in a tent outside of town with his cousin Dan Busby. When they realized they would starve if they stayed in the desert, they loaded up their cars and headed for Walla Walla, WA. While living in Walla Walla, Scott met Anita Russell at his Uncle Neil’s house. They got married on the same day Anita graduated from college. They then moved to Arizona where Anita taught school and Scott began his painting career. They had a son, Mark, in Scottsdale in 1988. At the time Scott was working for a Dental Lab, in which he made a set of dentures for his newborn son because he was born with no teeth. From the Phoenix area the family headed to Holbrook Indian School. There, Scott was instrumental in starting a pottery program where the students created pottery to be sold to raise funds for the school. After two years at Holbrook, Scott's family then moved to Colorado where they worked in Cortez. Anita was teaching and Scott was a painter of art and then returned to being a painter of houses because there was more money to be made. In June of 1999 Busby Painting, along with the family, moved to Loveland, Colorado where they continue to make their home. Scott was a self-taught artist. He shared that love of art with Anita’s students, wherever they lived. Scott will be remembered for his quiet, gentle, and self-effacing manner, yet his feisty, shrewd, and uncompromisingly keen observation of what was going on around him. His sense of humor was dry and dead-pan, often taking people delightfully by surprise. When living in Cortez, he would create political cartoons for the local newspaper. Here’s an example. Around the time President Clinton admitted that he had smoked marijuana but not inhaled, Scott published a cartoon of a prisoner being led to the gas chamber. The guard was whispering in his ear, “Just don’t inhale!” Scott frequently sent jokes to family members that tickled their funny bones. Scott was also an amazingly creative artist who never received the public acclaim he so richly deserved, instead creating quietly for himself and those in his circle, often with an element of the unexpected. When his son Mark was attending Campion Academy, Scott painted a large cougar, the team mascot, in the middle of the gym floor to give the players a sense of team spirit. He is the adored eldest brother of his siblings, cousins, large extended family, friends, church family, coworkers, and clients. As his great aunt summed up from the book of Proverbs: “a good and wise man will not be forgotten (Prov. 11:31), because he: • will be careful of what he says. . . [and] will be glad he did so. —12:14. • listens to others. —12:15. • doesn’t make a show of what he knows. —12:23. • works diligently until the job is done. —12:27. • listens first and then talks. —10:19. • does the right thing. —2:20. He is survived by his wife Anita, his son Mark and wife Anna, his father Don, his siblings Joy, Mike, Dani and Brady, nieces and nephews, and multiple aunts, uncles, cousins, and other extended family. We all loved and appreciated him greatly. We will miss you, Scott. The world is better for your having been here.

Scott Preston Busby was born in Pendleton, Oregon, Dec 23.1957 to Don and Sharon Busby. Scott moved around Montana most of his early years, living mostly in Billings. In 5th grade he moved to Salt Lake City where his Uncle Ron and Aunt Eva invited... View Obituary & Service Information

The family of Scott Preston Busby created this Life Tributes page to make it easy to share your memories.