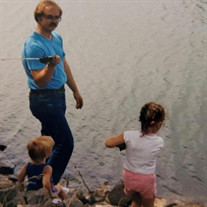 Shawn Wayne Walker, age 60, of Colorado, passed peacefully on April 25, 2022. Shawn was born and raised in Westminster, Colorado in September of 1961, where he graduated from high school in 1980. While a student, Shawn enjoyed numerous athletics, such as football and basketball. He was a talented craftsman, especially while working with wood and metal. Shawn married shortly after graduation. He started a family and began his lifelong career as a Master Plumber. The early years of the marriage were spent in Colorado, surrounded by Shawn’s extended family. His children grew up alongside their cousins, aunts and uncles, and grandparents. They also spent five years in Wisconsin, where his twin daughters were born, before returning to the front range to raise all five children within a short drive of the rest of the Walker clan. The family was able to put down roots in Arvada, and Shawn began to craft the idea that would eventually become Walker Plumbing, his first privately owned business. Owning his own company, particularly one bearing the family moniker, brought Shawn immense pride. The practice of this craft is where he expressed his creativity, ingenuity, and ability to make things work, skills that would continue to bring him joy throughout his life. He began to pass down some of his most treasured life lessons to his children; do something once, do it right, stand by your work, and always take pride in who you are. These lessons also took place in the garage, where Shawn provided first (and second, and third) cars to his children as they prepared to leave the nest. All of his children can change a flat, and at least half know how to drive a stick shift. Shawn was a caring father and grandfather, and he always had time for his kids and grandkids. He loved to host dinners at his house and relax with a movie afterward. If you weren’t laughing while Shawn cracked wise, you weren’t listening! He loved to laugh and to make people laugh. His second venture into business ownership saw the creation of a much more robust company: AFA (A Family Affair) Plumbing. Under the tutelage of Shawn, his son-in-law, David, and Shawn’s younger son, Ben, have grown the company into a well-reputed plumbing company in the Northern Colorado area. Beyond his career as a plumber, Shawn was a talented auto-mechanic, welder, and home builder. He could fix anything and generously offered his help where needed. Shawn was a motorcycle enthusiast. He was also an excellent cook. Shawn is survived by his children, Dania Laubach (Tony), Benjamin Walker (Kate), Cortnie Walker (Cameron), and Nicole Campos (David); his grandchildren, Kenzi, Zander, and August; and siblings, Renee Lyons (Glen), Mike Ginter (Sharon), Sherri Allison (Ed), Marsha Dodson (Richard) and Ty Walker (Bethany); as well as his nieces and nephews and their children. He was preceded in death by his parents, Marshall and Barbara Walker, the eldest son, Jeremy Walker, and niece Mandi.

Shawn Wayne Walker, age 60, of Colorado, passed peacefully on April 25, 2022. Shawn was born and raised in Westminster, Colorado in September of 1961, where he graduated from high school in 1980. While a student, Shawn enjoyed numerous athletics,... View Obituary & Service Information

The family of Shawn Wayne Walker created this Life Tributes page to make it easy to share your memories.