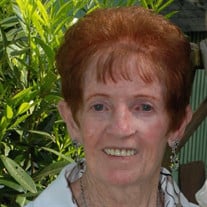 Sheila Julia McCluskey, died peacefully on December 20, 2019 in Fort Collins, CO after a long illness. She was 82. She was a beloved wife, mother, aunt, sister, grandmother, cousin and friend to so many throughout the United States, Ireland, England, Canada and Australia. Sheila was born to Katherine and Cornelius and was one of nine children. She was fiercely independent and left Ireland early on to carve out a life for herself in America. She met her husband of 58 years, Thomas McCluskey, at a dance in NYC. In between raising seven children with Tom in Dumont, Wanaque and south Jersey, Sheila worked various jobs to support her family, including a 20-year stint at the Quality Inn in Toms River, NJ. Sheila’s family was most important to her and the heart of everything she did. She and Tommy’s home expanded to welcome everyone. She thrived on having extended family and friends over for Sunday dinner and holidays. She was her kids’ greatest supporter. She spent immeasurable hours ferrying her kids to Irish dancing, Gaelic football, music lessons, cross country meets, gymnastics and their jobs. She loved camping with her family and trips to the Jersey shore. She cherished time sitting and having a cup of tea with her dear friends around Dumont. At times, it was the only time she sat down all day. She had an adventurous spirit and insisted on climbing Mt. Washington a second time at the age of 72. She spent the last five years of her life in Fort Collins, CO, with her husband Tom and her daughter’s family. Survivors include her husband Tommy and children Geraldine, John (Linda), Pattie (James), Aiden, Eileen (John), Kathleen (Adam). She has 12 beloved grandchildren. Also surviving are siblings, Joan (Jack), Mary, John (Kathleen), Kathleen, and Steve. She is predeceased by an infant son Stephen and son Cormic, as well as brothers Richard, Cornelius and Timothy. A service will be held at St. Elizabeth Ann Seton in Fort Collins at 10:00 am, on January 11, followed by a lunch and private burial in Fort Collins, CO. Please consider memorial contributions in lieu of flowers to Collingwood Assisted Living Benevolence Fund, 5055 S. Lemay Ave, Fort Collins CO 80525. Sheila’s family extends sincere thanks to Suncrest Hospice and the loving staff at Collinwood Assisted Living for their care and support of our beloved mom.

Sheila Julia McCluskey, died peacefully on December 20, 2019 in Fort Collins, CO after a long illness. She was 82. She was a beloved wife, mother, aunt, sister, grandmother, cousin and friend to so many throughout the United States, Ireland,... View Obituary & Service Information

The family of Sheila McCluskey created this Life Tributes page to make it easy to share your memories.