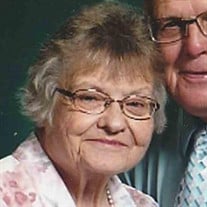 Shirley Ann Dewey, 81, of Kersey, Colorado, passed away peacefully Friday April 16, 2021 at Life Care Center in Greeley, CO. Shirley was born to Carl and Electa (Guinn) Isakson in Greeley, CO on January 15, 1940. She lived on her family farm and attended school in Gill, CO and a couple years at University of Northern Colorado. She played the piano since she was six years old and was able to bypass first grade because she was a very smart child and knew how to read above her grade level. Shirley graduated as Valedictorian of her high school class in 1957. She met her high school sweetheart, David E. “Gene” Dewey, at a Gill school dance where he was playing country guitar and singing, they attended Youth For Christ together, and they later married on October 25, 1958 in Greeley at First Covenant Church. Shirley was known to follow her husband with their boys throughout his 8 years in the Air Force. This included packing and moving to Japan by herself with the two oldest boys when they were very young. Shirley not only played the flute in high school but also played piano for Gill high school student, Tom Hernandez, as his accompanist, and for her husband for numerous events and church services. She worked at State Farm for a while before becoming a stay at home mom. Later she was assistant Postmaster in Gill for the post office for several years and sold Avon for several years as well. She selflessly took care of her aunts on her dad’s side, and always was helping with the grandkids. She collected Precious Moments figurines and enjoyed anything with butterflies, hummingbirds, or Bible scriptures. She especially loved greeting cards, and one of her first jobs was working at Woolworths in Greeley where her love of greeting cards began. She was an avid conversationalist, and loved to visit with her friends, family, and her caretakers at the nursing facilities and hospitals. The nurses of the 4North Surgical Unit at Medical Center of the Rockies especially grew to love her during her extended stays where they decorated her room for her 80th birthday, and they called her their “ShirleyBird.” She loved doing jigsaw puzzles and playing Bingo – especially with her grandkids as well as watching different game shows and Christian television shows. She enjoyed Bill and Gloria Gaither’s music so much that her and Gene took a Gaither cruise to Alaska several years back. Shirley had a strong faith in God and was a member of the First Covenant Church in Greeley where her Isakson grandparents were charter members, and she was church secretary up until the church closed. Shirley was currently a member of Sherwood Park Baptist Church in Greeley where she also served as church secretary and played piano not only for the services but for her husband as well. She was also a dedicated member of the local Shirley Club. Shirley is survived by her husband of 62 years, David “Gene” Dewey, of Kersey, son Tim and his daughters Valarie (Manuel) and their daughter Natalie, and JoAnna (Jon) and their son Lucas; son Daniel Dewey and his son Joshua (Charlotte) and their kids Jackson and Patrick, and his daughter Stephanie (Erin) Schauer and their kids Kayden, Corbin, and Pyper; son Greg (Courtney) Dewey and their kids Taylor, Abby, Anna, and Claire; son Jeff Dewey; and daughter Kristin (Kevin) Sloan and their daughter Kira Coffman. Shirley is also survived by her sister-in-law, Elnora Fox; her last cousin on her mother’s side, Peggy Tucker; daughter-in-law’s Kim Dewey, Jeri Renz, and Sheila Dewey, and many dear friends. She will be greatly missed, but knowing that she had eternal salvation through her Lord, Jesus Christ, and that we one day will meet again brings us great comfort. Shirley is preceded in death by her parents, sister Dorothy Hoot, and brother Nels Isakson. Services will be held at Sherwood Park Baptist Church, 3333 16th Street, Greeley, CO at 10:30 AM on Friday, April 23. Those who so desire can make donations to the general memorial fund at Sherwood Park Baptist Church.

The family of Shirley Dewey created this Life Tributes page to make it easy to share your memories.