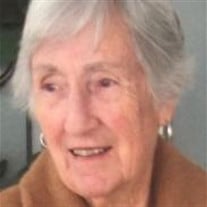 Shirley Louise Gausman passed away on March 12, 2017 after a short illness. Shirley was born June 9, 1920 in Powell, WY to Freda (Mills) and Horace Hubbell. Her father was a civil engineer for the US Bureau of Reclamation, and the family lived in South Dakota, Nevada and Utah when she was a child, ﬁnishing high school in Haver, Montana. Shirley earned a degree from Colorado A&M (CSU) with plans to become a home economics teacher, but she was not destined to follow that career path. She met her future husband, Glen Gausman when she was a sophomore and they were married after she graduated in 1942. She and Glen lived brieﬂy in Washington DC, Florida and Philadelphia while he was in the Navy. After the war, they returned to Fort Collins to put down permanent roots and raise their family. Though Shirley worked brieﬂy in Glen’s Veterinary clinic, she embraced the role of homemaker and mother. She was a very active and devoted member of Chapter CO of PEO, Kappa Alpha Theta alums, various book and bridge clubs for over 70 years! She and Glen were avid boosters of CSU athletics and as charter members of the Fort Collins Country Club were very involved in the golf leagues and activities there. Glen and Shirley had been married for 58 years before he passed away in 2000. Shirley remained busy and involved in organizations and family activities well into her nineties. She loved her volunteer work at the Well Baby Clinic and at Poudre Valley Hospital in her later years. Her wide circle of friends and her devoted family will miss her sense of humor and joyful presence in their lives. Her children, grandchildren and great grandchildren were her focus and pride. All have been enriched by her enduring, unconditional love and support. For the past two and a half years, Shirley has resided at Columbine Commons Assisted Living Facility in Windsor. There she made a new circle of friends who became very dear to her. The family is so grateful for the compassionate, personalized care and attention she received from everyone there - it became her new home. The family also wants to acknowledge and thank the caregivers who treated Shirley with professional kindness at Medical Center of the Rockies the last few days of her life. Shirley is survived by her daughter, GlennAnn Bowden (Bill), her sons, John Gausman (Pam), and Jim Gausman. Also, grandchildren Brooke Domich (Matt), Heather Bowden, Allie Gausman, Quinn Hollister (Doug), Ben Foster (Jill), and Peter Gausman along with seven great grand children: Emma & Jack Domich, Grace Hapcic, Sam & Alana Foster, and Kay & Max Hollister. She was preceded in in death by Glen, her sister Anna Belle Dunn, granddaughter, Lise Gausman, great grandson Henry Hapcic, and Jim’s wife Karin. A memorial service will be held at 2:00 PM, Sunday, March 19th, at Harmony Presbyterian Church, 400 E Boardwalk, Dr, Fort Collins. In lieu of ﬂowers, consider memorial donations to a charitable organization of your choice through Goes Funeral Care, 3665 Canal Drive, #E, Fort Collins, CO 80524.

Shirley Louise Gausman passed away on March 12, 2017 after a short illness. Shirley was born June 9, 1920 in Powell, WY to Freda (Mills) and Horace Hubbell. Her father was a civil engineer for the US Bureau of Reclamation, and the family lived... View Obituary & Service Information

The family of Shirley Louise Gausman created this Life Tributes page to make it easy to share your memories.