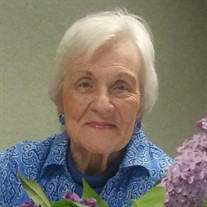 Shirley M. Petersen, age 90, passed away on October 21, 2019 in Fort Collins, CO. Shirley was born on May 3, 1929 in Hartley, IA to William and Lula (Kellum) Stellish. Shirley spent her early life in rural O’Brien and Clay County, Iowa. On May 3rd, 1947, she married Burdette Petersen. She spent most of her adult life in Forest City, Iowa where she was engaged in several occupations including Justice of the Peace and Real Estate. She was active in the Methodist Church and bridge club. For a period, she moved to Des Moines, IA, where she was a property manager. During that time, she trained as a Stephen’s minister. Her faith was always a very important part of her life. Family and friends were Shirley’s passion and delight, especially her grandchildren. In 2005 she retired from Real Estate and moved to Fort Collins, CO to be near her grandchildren. While living there she became very active at the Senior Center and served on the Dance Council. Even though she was unable to physically participate, she enjoyed organizing and attending the dances. Shirley is survived by her three children, Richard Petersen-Stellish of Madison, WI, Sue Ellen Petersen of Silverthorne, CO, Penny and her husband Dan Satterwhite of Fort Collins, CO, two grandchildren, William and Molly Satterwhite, her sister Bonnie Berenger of Loveland, CO, two nieces and a nephew. She was preceded in death by her parents and two brothers. Services will be held at 11:00 a.m., Saturday, October 26, 2019 at the Forest City United Methodist Church in Forest City, IA. Memorial donations or other gestures of love can be made to honor Shirley to the organization or charity of your choice. Please visit www.goesfuneralcare.com to share condolences with Shirley’s family.

The family of Shirley Mae Petersen created this Life Tributes page to make it easy to share your memories.