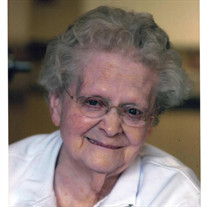 On the morning of March 27, 2021, at the age of 101, Stella Chrzanowski of Ft. Collins met her Heavenly Father. Stella was born to Stefania and Adam Chciuk in Detroit, Michigan in 1919. She attended Cass Technical High School where she learned millinery and specialized sewing skills and she studied sewing at Wayne State University. In 1945, she married Erwin Chrzanowski and together they raised two children, Laurie and Camille. After her father died and the Depression came, Stella remembered how her mother struggled to keep their family healthy and in their family home. She talked of one time when she longed for a doll and there was no money for one – but she got one from the Salvation Army. She never forgot their kindness. She always remembered her roots and how hard her family worked in those days. Stella was a hard worker from a young age. She cleaned, cooked, sewed and babysat for others and contributed to her family’s finances any way she could. She managed the counter at a neighborhood grocery, worked as a butcher at a local store and she did “War Work” as a riveter at Briggs Manufacturing in Detroit. When things needed doing, she was there, but behind the scenes so others would enjoy themselves. Stella appreciated animals and often talked of her beloved dogs, cats or birds. She loved and cared for her two children and two grandchildren. She recently met her only great-grandson, Becken. Stella was well-liked, though quiet and unassuming. She loved to laugh and knew most of the lines of her favorite TV shows. She spent her last years at New Mercer Commons where she was loved and cared for by her “girls” and often praised them to others for their wonderful compassionate care. Stella is preceded in death by her father Adam, her mother Stefania, her brothers Steven, Edward and Harry, her sister Lorraine, her infant daughter Cynthia, and her granddaughter Rebecca. She is survived by her two children, Laurie (Thomas) Meek of Ft. Collins and Camille (Robert) Wieder of Quakertown, PA, grandson Martin (Gina) Singer of Chicago, IL and great-grandson, Becken Singer of Chicago, IL A memorial service will be held privately at 5:00pm on Wednesday March 31, 2021. A live stream will be available at that time, with a recording to follow. Please call Goes with any questions. In lieu of flowers, donations may be made to the Salvation Army in Stella’s name.

On the morning of March 27, 2021, at the age of 101, Stella Chrzanowski of Ft. Collins met her Heavenly Father. Stella was born to Stefania and Adam Chciuk in Detroit, Michigan in 1919. She attended Cass Technical High School where she learned... View Obituary & Service Information

The family of Stella Chrzanowski created this Life Tributes page to make it easy to share your memories.