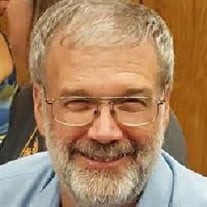 Our incredible son, brother and uncle, Steve Daron, passed away on September 25th, 2018 after an 11 month battle with cancer. Steve was born February 1959 in Robinson, Illinois to parents Dan and Sally Daron. The family moved to Fort Collins in 1967. Steve graduated from Rocky Mountain High School in 1977 and attended Colorado State University receiving his Bachelor’s degree in Anthropology in 1981. While in high school and college Steve worked at Steele’s Market on Foothills Parkway. Steve later received his Master’s degree at University of Wisconsin. After working in a number for temporary federal positions across the country, Steve found a home in Boulder City, Nevada. Steve was the Cultural Resource Program Manager at Lake Mead National Recreation Area in Boulder City, Nevada. He ensured the cultural, archaeological, and historical places and artifacts of the park were managed, cared for, and preserved for future generations of National Park Service visitors and researchers. Steve’s enthusiasm for archaeology led him to be involved with many organizations and activities. Steve was President of the Nevada Archaeological Association for many years, as well as an active board member. He was also the team lead for the Southern Nevada Agency Partnership. In 2003, Steve also became involved with the Nevada Cultural Site Steward Program that provides volunteers the opportunity to connect with local history and promote preservation by monitoring archeological sites in Nevada, including those within the Lake Mead National Recreation Area. He also recruited and trained stewards through local archaeology clubs he was active in throughout the state of Nevada, including the Nevada Rock Art Foundation and Archaeo-Nevada Society. Because of Steve’s work with this program, 41 stewards help monitor more than 30 archaeological sites at Lake Mead National Recreation Area. Additionally, the site stewards helped the Lake Mead Archaeology Crew document more than 28 rock art sites and 1,255 rock art and graffiti panels. Steve was also an active member of the Boulder City, Nevada Historic Preservation Committee from August 2010 through November 2017. He served as the Chairman from March 2016 through November 2017. Steve received formal recognition and awards for his dedication and commitment to his work, and work with teams, including the: 2013 Secretary of Interior Partners in Conservation Award; 2010 Preserve America Steward Award from First Lady Michelle Obama; and the 2010 Preserve America Award from the Department of Interior and the National Advisory Council on Preservation. Steve was loved and respected by his family, friends, and colleagues. Steve loved music and was an accomplished pianist. He enjoyed outdoor activities including camping, hiking, and cycling. Steve is survived by his parents Dan and Sally Daron, sister Sherry Daron, Sister Becky Braun (Jim), nephews Aaron Braun (Annika), Kevin Braun, niece Meghan Braun and great-nieces Makenzie and Myla. Steve’s family will be honoring him in a private gathering Sunday Afternoon. In lieu of flowers, memorial contributions may be made to Nevada Archaeological Association or Pathways Hospice of Norther Colorado.

Our incredible son, brother and uncle, Steve Daron, passed away on September 25th, 2018 after an 11 month battle with cancer. Steve was born February 1959 in Robinson, Illinois to parents Dan and Sally Daron. The family moved to Fort Collins... View Obituary & Service Information

The family of Steven Daron created this Life Tributes page to make it easy to share your memories.

Our incredible son, brother and uncle, Steve Daron, passed away...