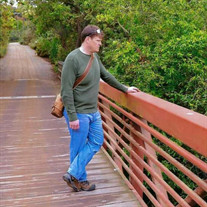 Steven Edward Ley, Jr. burst on to the scene at 10 lbs and 6 oz on February 25, 1978 in Greeley, Colorado. As he was a surprise several years after his sisters, he was enthusiastically welcomed and adored by his parents Kathleen (Jaynes) Ley and Steven Edward Ley, Sr. and his sisters Wendy and Marnie. He was the king of the castle and our lives, so much so that his grandparents nicknamed him "The Heir Apparent". As a child Stevie had a fondness for Star Wars, Voltron, GI Joe, Knight Rider, Dukes of Hazard, and his Big Wheel. He was known to ride his Big Wheel off of the back of his dad's pickup shouting, "Yee Haw!". He was the center of our world and he knew it. The Ley family moved to Aurora, Colorado in 1986 and Stevie relished riding his bike, playing football, watching the Broncos, camping, fly fishing, playing video games and funny innocent pranks. In 1991, his niece Taylor was born. He doted on her and was her favorite babysitter. Taylor and Stevie shared a special bond and as adults became buddies and roommates. Steve's parents divorced during this time and his father remarried Linda (Sorenson) Ley in 1992. This brought him several stepsiblings: Michelle, Jennifer, Rebecca, and Richard. It was during this time he discovered his passion for reading. Stevie read voraciously and sought books on nature, the universe, world history, Star Wars, and humor. Being an only son, Stevie admired, and relished time spent with his brothers-in-law Matthew and Buck. Video games were often played or discussed in their time together. At Colorado’s Finest High School, he met his best friend and brother in all things, Dan Phillips. They were and continued to be like Han and Chewie. He graduated in 1998 earning the Presidential Excellence Award and the Englewood Educator’s Scholarship and shortly after moved to California for a new adventure. In California, Steve worked as a bartender at the Sky Room in Long Beach and The Balboa Bay Club in Newport Beach. He met lifelong friends whom he treasured and brought him so much delight and stimulating adventures. Through them he found a fondness of Pho, triathlon racing, going to the horse races and more. Additional nieces and nephews arrived on the scene who loved to climb all over and play with their Uncle Stevie. Harrison Thomas, Reagan Dame, Pierce Thomas and Maddie Dame all remember the Christmas Uncle Stevie caught a picture of Santa going up the chimney while they slept. They remember his tight hugs where he would pick them up and shake them around so they would “feel” his love. Steve also taught himself how to cook and became the best chef in the family. His butternut squash spaetzle was a fan favorite and no holiday was complete without it. Steve really loved triathlon racing. He began with sprints and moved to Olympic length and eventually completed an Iron Man. The look of relief, joy and accomplishment reflected on his face when he crossed the finish line and heard the announcement, “Steven Ley, you are an Iron-Man!” will be a source of pride for his family forever. In 2012 Steve met the love of his life, Julia Calvert. They shared a passion for nature, movies, SNL, hiking, and sarcasm. They were married in a beautiful backyard ceremony in Sacramento on October 20, 2013. They enjoyed living near the beach in Redondo and Long Beach and all that California had to offer. Eventually, Steve’s yen for the mountains of Colorado became too strong and they moved to Northern Colorado in 2015. In Colorado Steve and Julia were able to spend more time hiking and camping and communing with nature. Steve continued to come up with more recipes and even started manipulating Julia’s Italian family recipes. This could have ended in cement shoes for him. Luckily, Steve was a very good cook and received the highly sought-after stamp of approval from Julia’s mom, Nancy. While in Northern Colorado, Steve worked at Noosa Yoghurt in production and then at J.M. Smucker’s as a Team Leader. As he did everywhere he went, Steve made so many friends that he cherished and enjoyed the time spent together. Steve was a rapacious reader and had an amazing breadth of knowledge that spanned anything you can imagine. Steve was devoted to his wife, loved his family, and treasured his friends. He was a true weisenheimer and always kept everyone entertained. He was loyal, funny, witty, sincere and gave the best hugs. Alas, Steve suffered from AFib for a number of years and after many treatments his sweet, kind heart wore out. Steve passed away on October 3, 2020. His death leaves a huge hole in our family and in our hearts. Steve is survived by his wife, Julia Calvert, his mother, Kathleen (Jaynes) Ley, his father, Steven Ley Sr., Stepmother, Linda (Sorensen) Ley, his sisters, Wendy Thomas (Buck) and Marnie Dame (Matthew), nieces, Taylor Ley-Leddy (Matthew Evans), Reagan and Madeline Dame, nephews, Harrison and Pierce Thomas. His step siblings, Jennifer Rowe (David), Rebecca Million (Jeff), Richard Thompson and their children along with the children of Michelle Thompson, who passed away in 2018, profoundly feel his loss as well. A Celebration of Steven's Life will be held 2:00 pm on Monday, October 12, 2020 at Windsong Estate Event Center. The service will also be available to stream online through zoom. Here is the Zoom information for those who wish to attend this way: Topic: Steven Ley Memorial Service Time: Oct 12, 2020 02:00 PM Mountain Time (US and Canada) Join Zoom Meeting https://us02web.zoom.us/j/86268586020?pwd=ZXdqSEhDcEwxTmJLWEdLUTJIckhFdz09 Meeting ID: 862 6858 6020 Passcode: 464047 One tap mobile +12532158782,,86268586020#,,,,,,0#,,464047# US (Tacoma) +13462487799,,86268586020#,,,,,,0#,,464047# US (Houston) Dial by your location +1 253 215 8782 US (Tacoma) +1 346 248 7799 US (Houston) +1 669 900 9128 US (San Jose) +1 301 715 8592 US (Germantown) +1 312 626 6799 US (Chicago) +1 646 558 8656 US (New York) Meeting ID: 862 6858 6020 Passcode: 464047 Find your local number: https://us02web.zoom.us/u/keuiutkttY

Steven Edward Ley, Jr. burst on to the scene at 10 lbs and 6 oz on February 25, 1978 in Greeley, Colorado. As he was a surprise several years after his sisters, he was enthusiastically welcomed and adored by his parents Kathleen (Jaynes) Ley... View Obituary & Service Information

The family of Steven Edward Ley Jr. created this Life Tributes page to make it easy to share your memories.