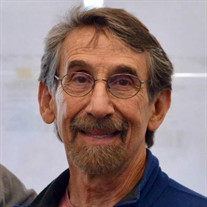 Steven Roger Pickelner, passed away peacefully at home in Fort Collins on August 18, 2021, surrounded by his loving family, after a courageous, 16-month battle with neuroendocrine cancer. His exceptionally youthful outlook and many physical pursuits belied his age throughout his seventy-nine years of life. Steven was born on February 4,1942 to William “Bill” and Sara (Finkelstein) Pickelner in Williamsport, PA, home of Little League Baseball. He grew up with his older brother, David, and cousins, Paul and Jerry Sykes. Like his father, Steven was an athletic young man and enjoyed the competition of team sports. Steven graduated from Williamsport HS in 1959, and left home to pursue his degree in Mechanical Engineering, starting at Cornell University, and eventually following his brother to Colorado where he completed his degree at Colorado State University. The two brothers were inseparable during those years, working on their degrees, then higher degrees, while also running a business promoting bands and music concerts in Fort Collins. A highlight was bringing in The Rolling Stones to Moby Arena in 1969. During those years they were infamous for their long flowing hair and legendary, rocking Fourth of July parties on Stuart St. In 1971, Steven and his brother David established Benzav Trading Co. What started as a cottage industry-style business, evolved into a Native American Fine Arts wholesale and dealer business. Steven’s passion and love for the people with whom he worked and the materials and artists in the trade, made it impossible for him to retire - this year marks the 50th anniversary of his company. Steven had a gentle, generous, and giving heart, and loved sharing with and learning from others. He loved food and enjoyed making those around him feel at home through his passion for cooking. He was equally passionate about exercise and athletic pursuits. Skiing, cycling, and hiking, were a few of his favorite things. For Steven there was never a bad day on the slopes. He was also very committed to the Fort Collins community: serving on the board of The Taste for many years (a fundraising entity for the Food Bank of Larimer County), and as a founding member of Congregation Har Shalom. The pinnacle of Steven’s life was becoming a father. He and Tracy were devoted to their children Aaron and Sophie, sharing their passions for the outdoors, their cultural backgrounds, and the love of learning. Camping, skiing, cooking, cottage time in Ontario, coaching soccer, proudly watching skating competitions and other sporting events, talent shows and recitals, dinner parties with family and friends, movies and traveling are just a few of the many things he loved to do with the family. And in the end, the family was inspired by Steven’s silent grit and determination, humor and grace, to make the most out of each and every day, throughout his journey with cancer. Steven was preceded in death by his brother David, his parents Sara and William “Bill” Pickelner, and cousin Paul Sykes. He is survived by his loving family, Aaron David Pickelner, Sophie Mae Pascale Pickelner, and Tracy Tostowaryk; in-laws Wally and Joan Tostowaryk; cousins Bobby Pickelner (Beverly), Jerry Sykes (Ilene), and Paula Kohl; cousin-in-law Bonnie Sykes, as well as their extended families. The family is grateful for the family, friends, and caregivers who surrounded Steven, Tracy, and their children with love, care, and support. In lieu of flowers, please consider making a donation to the Food Bank of Larimer County, Pathways Hospice of Northern Colorado, or a charity of your choice. Funeral services were held at Congregation Har Shalom on August 20, 2021. Burial followed at Roselawn Cemetery in Fort Collins, CO.

Steven Roger Pickelner, passed away peacefully at home in Fort Collins on August 18, 2021, surrounded by his loving family, after a courageous, 16-month battle with neuroendocrine cancer. His exceptionally youthful outlook and many physical... View Obituary & Service Information

The family of Steven Pickelner created this Life Tributes page to make it easy to share your memories.

Steven Roger Pickelner, passed away peacefully at home in Fort...